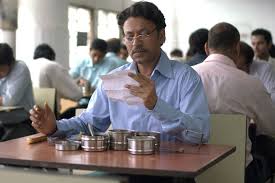 Mumbai is one of the most cinematic cities. It is a city like no other, every street thrumming with life, bursting with the vibrancy that comes from an entire nations packed into one city. All of India is in Mumbai, and the result is a city that is chaotic, noisy, dazzling, varied and lively. Everything you might want from an onscreen conurbation. Few directors have captured this world of contrasts quite as well as Ritesh Batra does in The Lunchbox, although it isn’t through Danny Boyle style frantic editing and sound mixing. Instead, he captures a tentative relationship forged through letters sent via the city’s famous ‘dabbawallas’ who deliver lunches all around the city. Both are lonely people who find a connection over a shared love of food, while the one eating them – grumpy office worker Saajan Fernandes – also has to train a bright young man from a different social class to him to replace him in his job. Through this trio of characters, Batra finds quiet truth in a city of noise, evoking the melange of lifestyles that makes Mumbai what it is.

Irrfan Khan plays Fernandes with the kind of restraint and weariness that brings to mind the great Takashi Shimura in Kurosawa’s Ikiru. He’s a man who does everything by routine and is content, largely, to remain lonely. The arrival of an unexpected lunch from Nimrat Kaur’s neglected wife and mother Ila throws this routine and loneliness into confusion, such is the deliciousness of the food and the attraction of the notes that come with it. Kaur’s performance is so bright and appealing that it makes it hard to believe that any husband could ignore her, but she is nonetheless a wonderful presence, visibly frustrated but compassionate and sympathetic throughout. Their two lives, and the life of orphaned, self-made accountant Shaikh (Nawazuddin Siddiqui), all hinting at the world outside this story. Ila lives beneath ‘Auntie,’ a vocal, permanently off-screen neighbour who helps with recipes and dispenses loud advice from her room above, suggesting that the city is just too crowded to fit into the frame – the world carries on even without the camera pointed at it. Shaikh, meanwhile, is a man who tricks his way onto first class train carriages, invades personal space and has run away with his bride to be, a stark contrast from the stern efficiency of Fernandes. Together, the three of them make for an immensely appealing group, and Batra finds an intimate and personal story in a city that is, he suggests, absolutely full of them. The regular shots of lunchboxes, each travelling to a different person, suggests that there are many more to tell – one for each lunch.

The Lunchbox is out on DVD now