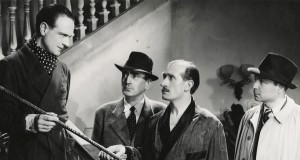 The Murderer Lives at Number 21 could be straight out of an Agatha Christie novel, an episode of Murder, She Wrote or Midsomer Murders or any other by the numbers murder mysteries, which audiences still find as thrilling today as they did 70 years ago. Directed by Henri-Georges Clouzot, Murderer tells the story of Monsieur Durand, a mysterious killer who seemingly chooses his victims at random, murders them and then leaves a calling card with his name. The only catch? No one knows who this Durand actually is, therefore leaving the town in horror that anyone could be the murderer.

Inspector Wenceslas Vorobechik (a hilarious Pierre Fresnay) is in charge of tracking the killer and closing the case. Through a very funny and illuminating sequence, the blame for having not yet found the murderer is handed down the chain from the commissioners at the top of the command all the way down to Inspector Wens. As each tells the person one lower from them that if they don’t catch the murderer, they will be fired, Murderer is setting up a clever and satirical view on the traditional murder mystery. Whereas the Inspector could have been initially introduced and simply followed the clues till he finds the culprit, Clouzot is making some very interesting and knowledgable points about blame in government and society. These points are just as relevant today, where people aren’t willing to assume blame for not performing well enough on the job. Countries all around the world moan about the state of their government, who aren’t doing a good enough job; there is always someone lower down the food chain who can relenquish your faults.

Running alongside Wens’ narrative is that of his ditsy struggling girlfriend, the actress Mila Malou (Suzy Delair) who embodies another part of society, 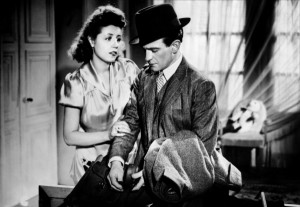 which is still as relevant today as it was in the 1940s. Malou is determined to become an actress; a celebrity, but when an agent tells her that he is more inclined to hire Monsieur Durand that her, she is left dumbstruck. He explains that Durand is on the front of the newspaper, in actually fact, his name is the very reason the newspaper will sell and if she can get her name on the paper, then he would be just as inclined to hire her. Surely this rings true with the nature of celebrity today and fame obsession, it doesn’t matter any longer about whether you have a genuine talent, but if you can get your name in the paper and can control your own self promotion, then the steps to becoming a celebrity are so easy. Whilst considering how to get herself recognised, she decides to latch onto Durand’s story and become part of the team to catch him. Of course this initially allows for some rather cliched stereotypes about women, especially argumentative women, but during the sequence when Malou is arrested and taken to the police station as she had a weapon, it is truly hysterical as Delair performs some wonderful comic timing and carefully represents the nuances of her character.

Whilst the first half of the film introduces the threat of the murderer, with some very innovative and unique point of view shooting, it does little else in the great scheme of the film. Just concentrating briefly on the point of view filming; it is both a surprise and simply wonderful to see that the audience is very quickly aligned with the eyes of the murderer. Why does Clouzot do this? I think it is partly down to the idea that he could do it and therefore wanted to show off his filmmaking, which is never a bad thing but also to give the audience a taste of what it is like being the murderer. If the audience see the killing taking place from the killers eyes, then they are actively taking part in the crime and therefore they are being told to not side, so straightforwardly, with the attempts of the police in catching Durand. The point of view shooting is ingenious and one of the absolute joys of Murderer especially when you consider that it is still being done in a film like Franck Khalfoun’s Maniac this year, to shock and entertain audiences and to bring them closer to the killer. This is is 18 years before Peeping Tom and so this is an example of Clouzot’s filmmaking at it’s best. As well as this, seeing both the murders but also the streets through the eyes of the murderer bring about a sense of alienation and claustrophobia for the audience. As the film was made during the time in which France was occupied by the Nazi’s, this sense of the closed in streets, ready to swallow everyone up places an emphasis on the war torn country and the dread of the people living in France. 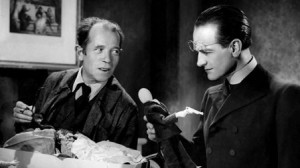 Whilst the first half of the film attempts to create a subtle and yet dangerous atmosphere, the second half of the film takes note from the ‘locked in’ mystery. Through clues and knowledge of people around, Wens works out that Durand lives as a tenant at a boarding house at No. 21 Avenue Junot. He decides to go along to the boarding house, dressed as a Christian minister to infiltrate the house and root out the killer. Of course, Malou has worked out what is going on and decides to come along for the ride. She pretends not to know Wens and they meet in secret to report their findings. Each of the people living in the boarding house has a story, they are strongly crafted characters, which we know today as murder mystery archetypes but I would go so far as to suggest Murderer invited them to stay in the genre. During the time in the house, one really does feel like they are in an episode of Murder, She Wrote or a Poirot novel because each of the characters are moody, they have a mysterious history and they all could be the murderer. This is the fun of the film but what makes Murderer feel somewhat dated is the fact that things haven’t changed very much in the genre, but instead we can get the same sort of thrills most evenings on ITV.

Whilst the final parts of the film do twist and turn, and when someone from the house is arrested but another murder is committed, it does leave the audience wondering for a brief while longer. But when the Durand is actually revealed, I felt that the twist was probably a little more a shocker to the audience it was intended for rather than our contemporary audience of today. The Murderer Lives At Number 21 is a beautifully shot, well acted piece, which probably started an entire history of the contemporary murder mystery, but it doesn’t do anything spectacular and is by no shot of the imagination a must watch but rather something easy to catch on a rainy Sunday afternoon.

Founded in 2004, The Masters of Cinema Series is UK-based Blu-ray and DVD collection curated by Eureka! Films are presented in their original aspect ratio, in transfers created from recent restorations or the most pristine film elements available.