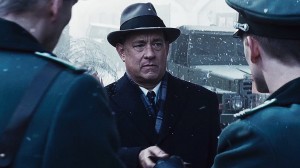 Spielberg’s Bridge of Spies is an involving and essential Cold War drama, led by a pair of extraordinary performances from Mark Rylance and Tom Hanks. Focusing on the true story of James B. Donovan (Hanks), an American lawyer who is hired to defend an alleged Soviet spy living in the USA. He is then asked by the CIA to travel to a cold Berlin at war with itself to negotiate an exchange for the spy, Rudolf Abel (in a compelling and powerhouse performance from Rylance) with an American spy-plane pilot who had been shot down during a mission. Whilst in Berlin, Donovan learns of an American student who has also been arrested whilst trying to go between the two sides of Berlin as the wall was being erected.

Bridge of Spies is an illustration of some of Spielberg’s best work; it is epic, stunningly shot, tense and digs beneath the action to the real drama going on in the lives of these characters. The first half of the film concentrates on Donovan’s case with Abel in the USA, a striking look at politics in America and the court system. Unfolding like a courtroom drama, it looks at the relationship between the two men. The accomplished script, written by Matt Charman, Ethan Coen and Joel Coen, tries to find the balance between good and evil. Initially Donovan is vilified by people around him and the USA in general as he stands side by side with someone being accused of passing state secrets but as he gets to know Abel, he learns more about the man and this is important to his case but also growing as person and a lawyer.

Culminating in a powerful speech, this first story finds Donovan learning about how the law in his country really works. But as the film moves into its second half, the story switches gears. As the case has been continuing, a secret team of US Army combatants have been employed to take part in a spy mission over the Soviets. The one rule is that if they are caught, they must end it all to ensure they aren’t questioned. In one of the most exciting plane scenes in cinema for a long time, the team start their mission before one of the lot is hit and falls from the sky. This edge of your seat action moment is a brilliant coda into the second half and as the soldier floats down in his parachute (which had previously been caught onto the burning plane), he is arrested and swiftly put in prison. Soon the CIA invite Donovan to go to Berlin to negotiate an exchange for the soldier, to which he accepts but what he doesn’t bargain on is the secrecy and espionage that he will witness.

A bloody and cracked Berlin is presented with such incredible fiery artistic flair. The colours are striking and the city really comes alive on 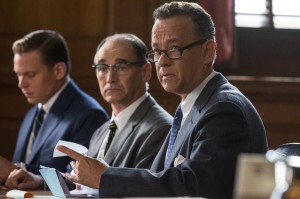 screen. Donovan must speak to those keeping both the solider and the student (opposing sides that aren’t willing to work together) and figure out a way to get both Americans back safely. There is a lot of cat-and-mouse, whispers and secrets and a hell of a lot of bluffing if everything is going to go smoothly.

What is both surprising and widely appealing about Bridge of Spies is that it is also so very funny – the script has a natural touch to it that allows the characters to feel relatable and human. They have the same ordeals as we do today (but obviously pretty heightened), they get annoyed in the same way and are just as sarcastic. The central performances are also part of the reason why this works so well – Hanks plays the everyman, a highly intelligent and motivated one, but an everyman nevertheless. He is sweet, touching, powerful and charming and he takes over the screen whenever he appears. Paired with Rylance, the pair seem as if they have been friends for years and do an outstanding job of bringing the audience in and caring about both characters.

A brilliant film and one of the best of 2015, Bridge of Spies is a fantastic drama filled with a history worth knowing.