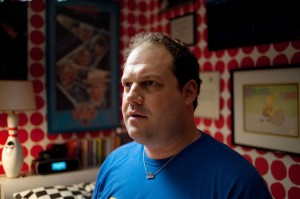 Todd Solondz, the director who brought us Happiness and Welcome To The Dollhouse, and therefore known for never shying away from making his audience feel as uncomfortable and awkward as possible returns with his new comedy drama, Dark Horse starring Jordan Gelber and Selma Blair as the two main characters.

Dark Horse follows Abe (Gelber), a single grown up man who still lives at home with his parents (Christopher Walken & Mia Farrow) who collects comic book toys and works for his dad’s company, despite the fact he hates it more and more everyday. At a wedding, he meets Miranda (Blair) and here starts his pursuit to get her to marry him so they can start a life together, although he wants the couple to move into his parents house, which they will be able to take over once, and if, his parents move to Florida.

On the tin, Dark Horse, doesn’t seem all that out of the ordinary, especially given the storylines of past Solondz films – but Dark Horse consistently gives a whiff of things going wrong and awry throughout it’s first act. Mix into the pot that Miranda is drugged for depression and her revelation of the disease she has to Abe, once she accepts his engagement, the film suddenly takes a violent turn towards internal reflection and all the characters, especially Abe, take a look at themselves.

Dark Horse also is able to blend seamlessly, both reality and illusions inside Abe’s head, 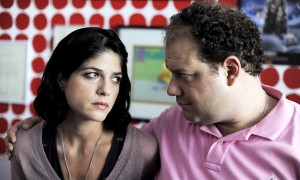 without causing the audience to see straightaway that these moments aren’t real. The sequences which particularly stand out are those featuring his father’s secretary, Marie (a stunning Donna Murphy) who has a soft spot for Abe, but must repress these feelings in the office and she appears as a frumpy, older woman who keeps to herself. But when she appears outside of the office, she almost turns into a Sharon Stone – Catherine Tramell type character who lets her hair down, drives a fast sports car and lives in a sexy, modern house outside the city. She appears to Abe as and when he finds himself thinking deeply and she, ironically, directs him and helps him find his way – but to no aval.

Furthermore, the music used in Dark Horse, is perhaps the most ironic of all. Going down the teen-pop route, music featuring lyrics like “Today is gonna be the perfect day, to step into your life…” highlights the emotional turmoil of the characters in the film. This music engages with the darkly comic and causes you to question the motives of the characters throughout the film – especially in the ways in which the music simply stops. So many times throughout the film, Abe has examples of these major toned poppy pieces of music playing in his car or as his phone ringtone and without any warning, he picks up the phones or turns of ignition and the music just stops as well – this jarring affect is a small way in which Solondz is trying to alienate his audience by playing against cinematic convention of fading a song out. 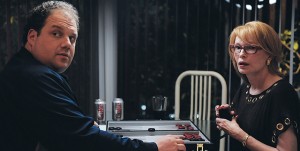 One of the weaknesses of Dark Horse, is perhaps the ways in which it tries to play the sympathy card for the characters – especially someone like Abe, who by the end, I actually grew to dislike (despite really enjoying the film). In the past, Solondz has drawn pieces of great dramatic irony and alienations – ways to really make the audiences’s skin crawl but Dark Horse seems to put all that importance and pressure on the character of Abe, which I don’t think Gelber is up to, despite his strong performance – it takes a very special actor to encompass sympathy and irony for the audience, and I don’t think they star in this film. Oddly, many have suggested that this may be the softening of Solondz’s cinema, but I disagree because the ending of Dark Horse, is in no way a call of softening (but I won’t spoil it for the readers), but by completely blurring the lines between realities, Solondz creates a verisimilitude which is highly alarming.

Performance wise, Gelber is brilliant as Abe, although as I said before, sometimes a little weak on making me actually give a damn about the character – who I felt became very selfish and annoying towards the end of the film. Although he performs an interesting level of angst for an older man, he plays the character like a teenager gone wrong and that may be what Solondz was going for, but he just looks like a baby to me. The best scenes he does are when he is in the toy store and trying to take back one of the toys he bought – both times this sequence come around, you can see a level of anger, not only from Abe but also Gelber waiting to come out.

I haven’t spent much time talking about the brilliant Selma Blair, who shines (ironic use of 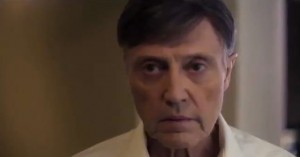 the term) every time she is on the screen. As the depressed, failed writer, Miranda, she sets to work to fix herself and everything around her. But from the very first scene, you can see that this is an unlikely cause for herself, as she sits and watches the wedding crowd with such disinterest, you could imagine her wanting to be somewhere or someone else. She meets Abe, and comically, tries not give her number to him but fails. On her first meeting after the wedding with Abe, she tries to not get too close to him, but fails and they reconcile over beers. Miranda does a great deal of failing and giving up throughout the film, and she finally decides to give up on her thoughts of happiness to accept the marriage proposal from Abe – it is just what she has to do, and seen as this world is being created by Solondz, it actually makes sense for it to happen.

The supporting cast are all pretty great as well, Walken gives a runaway performance as Abe’s disinterested father who is trying his hardest to get his son out from under his feet both at home and in the office. He towers his wife (Farrow) in opinion, and makes sure what he thinks is known. As I mentioned before, Murphy plays Marie, who stands out from the rest of the characters because she is the only one who really accepts reality and knows herself by the end of the film – despite, ironically (again, use of the term) her repressed state in the office. Lastly, Zachary Booth, plays Abe’s cousin and his rival for his job, but although he has a small role, he is a brilliant backstabbing git throughout the film. 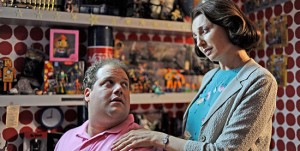 Dark Horse may not tick everyone’s boxes, it’s not an easy watch, but if you want to watch a film by Solondz, none of them are – this is possibly the easiest. The film is a little weak on the alienation that we have come to expect in this type of cinema, but that is why it may be his best film because an audience who may not have watched his cinema before may be a little more welcoming now. The film looks and sounds beautiful, a director who really has learnt from the past and the casting is spot on.