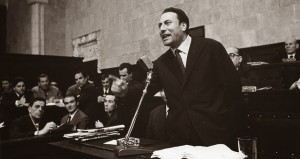 It comes as no surprise to see the Masters of Cinema series deliver once again. This time they are serving up a course of fantastic Italian fare from 1963, Francesco Rosi’s politically charged Hands Over the City (Le Mani Sulla Citta). Focusing on post Second World War Napoli, Rosi constructs a story of corruption and greed with just a few staunch voices fighting for the people of the city. In a culture that seems to lean towards the right wing, these voices often fade with a frustrated acceptance, Rosi captures this all in the classic Italian Neo-Realist fashion of Rosselini et al, but injects a sense of that courtroom drama that makes films such as 12 Angry Men such engrossing viewing.

The film begins with a wide shot of the ever expanding city of Napoli, men in suits and expensive jackets are in the foreground discussing the use of the land that lies before them. Edoardo Nottola (Rod Steiger) is instructing the men how to make the most money, getting in ahead of the game. These men are of public office; this is a scene of government corruption. Nottola is offering them 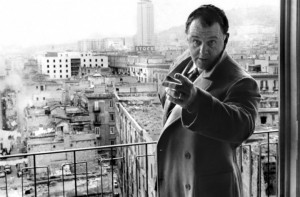 a “you scratch my back and I’ll scratch yours” situation, away from the watchful eyes of the public. Rosi then introduces the masses of Napoli, old buildings that have seen better days, house many a family, street vendors supply the workers with meals as they break from labour. This routine is abruptly interrupted by the collapse of a building. The poor families caught in the street run for cover, not all of them make it. This opening segment displays the social division at the heart of post-war Italy and Rosi captures it with a sense ofrealism and politically driven verve.

Rosi uses this film to display everything he hates about the political classes in Italy. The men making the deals speak of having “clean hands”, clean enough to not get caught that is. After the calamitous building collapse, Nottola is put under the microscope by leader of the leftist party De Vita (Carlo Fermariella). He knows Nottola is implicated in the disaster in some way and 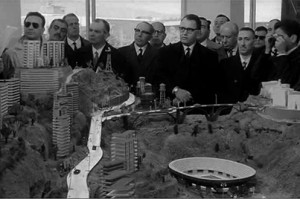 is convinced of his involvement in shady land deals. The energy and passion De Vita displays is a testament to the fiery conviction of Rosi and Fermariella, who turns in a film stealing performance.

Yet the plans of the wealthy continue. Though the centrists take power in Napoli, it all hinges on the wealthy elite of the right, the overly-masculine dominance of politics avails in an arena where the “only true sin is losing”. Rosi directs a serene and beautiful montage of public support for a socialist movement, but delivers a damning indictment of what power the will of the people really musters. The real action is happening in the council chambers where greed will always win the day. De Vita is a lone guardian of the people but Rosi is not so romantic that he would hand this man victory, he knows at the end of the day in Italy, money talks and morals walk.

Hands Over the City is available on DVD and Blu-Ray from 31st March courtesy of Eureka!