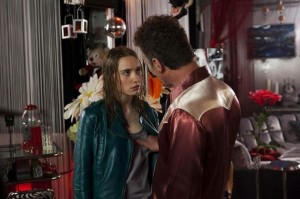 Despite the fact that Student Services tries to illuminate an actual issue that is known throughout the student population all over the world, the film itself does little to comment on the actual facts, offers very little explanation and no answers on how to change what is currently happening. The film does try to introduce to the audience the issue surrounding money available for students, or lack therein. It does further highlight the extents that students will go to, to make sure they have money in their accounts and it lightly comments on the fact that there are so many other expenses for student other than just their university fees; you have to take into consideration food, living costs, rent and all those other university extras like taking part in the community and textbooks.

It seems like a rather great time to release this film in the UK as well, due to the news in recent years surrounding the increase in university fees. Whilst the intention is there to comment, Student Services never quite manages to become political enough for the audience to really take notice. Instead, director, Emmanuelle Bercot is much more interested in the story of one girl, Laura (Populaire star Deborah Francois) and how her lack of money can cause her to take a route she would have never thought possible and some of the repercussions of this on her academic and social life.

The film itself was made for television in France in 2010 and it is easy to understand why it was so; despite the fact that nothing in Student Services is 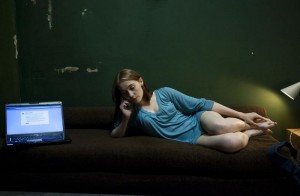 explicitly bad, there is also nothing, which makes it stand out from any other drama being made. The story has a very strict beginning, middle and end, upholding many televisual conventions without pushing the boat out too much. It has a very BBC drama feel about the entire affair. As well as this, there is a very clear repetitive nature in the film, something that is perfect for television as well as the episodic nature of the story. Whilst the film was shown in one part originally, there is no reason why this wouldn’t work broken up allowing the audience to wander in and out of the room whilst watching because honestly you don’t miss too much if you duck out for a few minutes.

Laura is a top grades foreign language student, who has her eye on the final prize of leaving university with a good degree but she is learning that she is still going to have to pay her way through and without a helping hand, she is going to have to do it alone. The film does have quite an interesting stylistic technique, which almost break the narrative and the forth wall, by totalling up everything Laura needs or wants to buy. It is a little reminiscent of the Mastercard adverts, but it really does drum home the expenses that we all encounter in life. Whilst at first this is used to represent the university textbooks that she needs or the cost of rent or food, it later is used to show off the drinks that she is buying for her friends; an expense she really could do without. 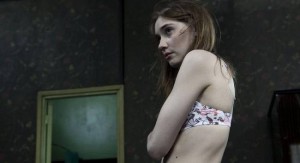 Whilst she finds it difficult to keep up with the rent she is adamant that she will find a way to make a little extra money. On learning about an online website where she can offer her ‘services’ for a little extra, Laura decides to take a look at the site. One evening she answers a personals ad, ‘Joe, 57, who seeks a female student for tender moments.’ The pay for is 100 euros per hour. This seems to good an opportunity to miss out on and so Laura answers and meets with Joe for these ‘moments’.  This first encounter between them is one of the highlights of the film, so intensely powerful that you can see every sorry emotion on the face of Francois. She is so physically repulsed by what she is here to do that she is constantly considering backing out and leaving but really she needs the money. Joe, played by the subtle and yet brilliant, Alain Cauchi, is an older man who really just wants to act out some of his fantasies with a younger woman before it becomes too late. He is almost is played as sympathetic and although what he wants to do is pretty horrific, there is never a moment until the end when Joe is played as the ‘bad guy’.

Their first encounter is beautifully shot in a sparse hotel room with little dialogue but instead both their faces say it all. Joe has written in a letter what he wants Laura to do step by step; this is a great idea in the film holding the suspense of what is going to happen for the audience. Laura is the first person on screen to know what Joe wants and it leaves the audience to create in their imaginations what they expect Joe wants Laura to do. This active audience involvement is one of the best things about Student Services and something, which could have helped its political engagement and call for change.

As the film continues, Laura meets with more men providing them all with something intimate and different. In a very clever montage, Bercot 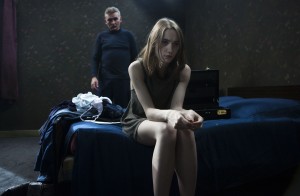 shows Laura meeting with her clients in a variety of circumstances and showing what she is charging each of them – from standing around hugging to having sex itself. It seems that few consequences are considered in the film until one of the clients only gives her 20€ rather than the 200€ they had discussed. Suddenly she stops in her tracks and reconsiders whether this is the best possible solution.

Along the way various other storylines surrounding Laura are introduced; she splits with her boyfriend but starts a relationship with another man, Ben (Mattieu Demy) who is aware of what she does. Whilst at first they joke that Ben will look after her and be her pimp, he quickly grows tired with having to share Laura with all her clients and starts to despise her for what she does. When he decides to end it with her, there is a deeply depressing sequence when she goes to give him a blowjob as she feels that is what is going to make him stay. At this point, she has forgotten emotion and aligns everything with sex.

Oddly her grades and work do not suffer throughout the entire film as she keeps coming out with the top averages. Her university life does take a back seat in the film and whilst she first started this job to pay her way through, she starts to instead use the money on drinks and clothes that she really doesn’t need.

Student Services is an interesting and subtle film about what extents students are pushed to, to ensure they can pay their way through university and whilst it is widely known that a great number of students do turn towards some sort of prostitution or escort service, the film itself seems to offer no alternative instead saying that everything will be okay in the end.