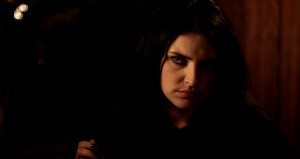 Gerard Johnstone is most certainly a name to keep an eye on; his debut feature length film, Housebound is one of the funniest comedy horrors in decades and showcases the talent both from the crew and cast from New Zealand. Starring Morgana O’Reilly as Kylie, a small time crook who has been caught one too many times. Instead of being placed in prison, which probably wouldn’t help anyway, her punishment is far worse; she must return home to where she grew up where she will be placed under house arrest and have to live with her mother, Miriam.

Having to go home is bad enough but what makes it worse is that Miriam, a busybody and the town’s gossip, is convinced that the house she lives in is haunted. As to be expected Kylie does little around the house and is far from interested in integrating herself into her mother’s life – instead opting for sitting around on the couch all day and eating her mother out of food.

It is during two particularly funny sequences that the course of the film starts to change and the power of Johnstone script and directing come through; after a long day of doing nothing, Kylie is trying to have a cigarette and chill out but she turns on the radio to hear her mother in the other room chatting with a late night presenter about her suspicions that the house is filled with ghosts. She isn’t sure what her first emotion; anger just because it’s her mum, embarrassment from whom may be listening or maybe even a little bit curious herself of the creaks and bumps in the house. Miriam confronts her after the phone call and reveals that the story may even go deeper, but Kylie has absolutely no interest whatsoever.

In a second sequence soon after, Kylie is on the toilet doing a wee and every time she hears a small noise in the walls, her stream pauses and 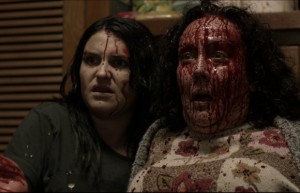 she looks around suspiciously in the hope that there will be a straightforward answer to the noises. Every time the noise stops, the stream continues and on until she finally finishes in the loo. This is a simple scene, but so funny because it plays on the audiences’ own little quirks – plus putting an activity so mundane like going to the toilet in the middle of this ghost story is wonderful because it makes the characters real but also is just something the audience aren’t used to seeing!

Over time and with the help of a local officer, Kylie soon becomes obsessed with the history of the house that she was brought up in and finds out that it used to be a home for children but one of them had been killed. She is sure that this must be the ghost of the dead child in the house, which is taunting her and unhappy with the new living arrangements. She does research and becomes sure that to get the ghost to cross over, she needs to find the killer and resolve this chapter. Here ensures a thriller cum detective story, but Kylie is so prone to mishap that she really isn’t going to get too far.

The final chapter of the film jumps out of nowhere and slams straight into Kylie and Miriam as well as the minds of the audience; it is really so out of this world and random, that the audience can only sit back, forget about their world and indulge themselves for an hour and a half in this silly and fun world of ghouls and maybe murderers.

With Housebound, Johnstone cements himself as your new favourite horror director and a damn clever one at that. The chemistry between O’Reilly and Rima Te Wiata (Miriam) is quite wonderful; they have a great script to play with but they bounce off one another throughout, whether it’s an angst filled daughter and slightly clueless mother or as the ghost busting team they become together towards the end. Hugely recommended and something that is prone to repeat viewings; Househound is likely to be the genre film that gives you the most fun you’ll have all year in the cinema.