Sometimes in my long film watching life cycle, I have come across films that are universally adored. They often suffer because of this relationship between critical praise and viewer apathy. Slow burning, mind melding The Endless seemingly hasn’t suffered under the weight of this. I am not sure that it rightly deserves the praised heaped on it but I am sure that the film is far better then a wide range of films you will see this or any other year. Two brothers Justin (Justin Benson) and Aaron (Aaron Moorehead), former members of a UFO death cult (whatever that might be) broke free and are living in ‘normal’ society. Then an unexplained video appears and they see their former friends in the cult living a life of peace and solitude. Together they agree to return. To concur demons maybe. To understand what they have, possible. To settle scores, likely. 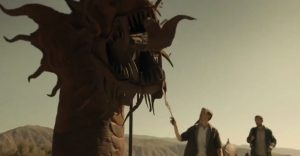 Are there Alien lifeforms monitoring and controlling us? This seems to be the premise raised by The Endless. It fails to really answer these questions satisfactorily but i am still unsure if that is not a part of it all. Like Donnie Darko meets the abstractions of Lynch. The answers perpetuate questions. We can only surmise the reality. The human and supernatural element of this film, fell laboured but again this is intended maybe. It makes the whole harder to invest in for me. Less narrative tightness, more preamble and you feel disconnected. However, when its flowing (and it does after the 45 minute mark) it has suspense dripping from its very core. Driven by the outer bodily drive of a low level noise, akin to Villeneuve. It makes you work for it but delivers in the end.