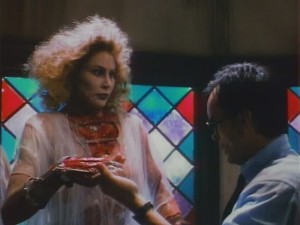 After the horrors of the Miskatonic University hospital morgue murders, where Dr Hill killed four innocent people (Apparently).  Two medical students that survived are back and looking to research more into life after death. Herbert West (Combs) experiments in reanimation have proven successful but Dean Cain (Abbott) has always been at odds with them. They move into a house in a cemetery and continue working at the hospital. When West suggests that they could reanimate Cain’s long dead love Megan after he finds her heart in storage it becomes all they can do. Finding body parts and organs to create the flesh monster and female creature that is the bride of the re-animator… Sadly Dr Hill might not want them to succeed and his living head is out for revenge. 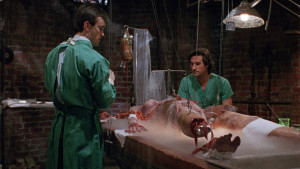 Re-Animator was the 2nd best horror film of the 80s. Splatter,gore, sex and comedy mixed to make a flesh blasting masterpiece. Its success made it obvious to all that a sequel would be released and here it was. A film that took some of the book, a title from Frankenstein lore and a whole heap of bites that worked in the first and that fans loved.  It hasn’t the strength of the original by many yards. It still is funny, has a great double act in Combs and Abbott and has some very good set pieces. The problem is that it feels done already. 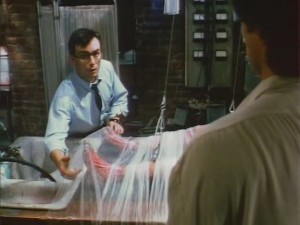 This makes it heavy. Heavy and slow in places. I would say that on occasion I felt that Yuzna had less care for it and as such lets it run on a little.  Its not terrible for this and do not get me wrong, I wanted this sequel. Compared to now where you have them shoved in your face, this was a much wanted and expected desire. It is just that the film is not in the same space as its older brother. It is still worth your time but do not expect that wonderful darkly sardonic sense of wit and splatter. Expect instead that rather tamer idea of what a larger audience might like. More guts, blood excess and a little splatter comic book fun.

The Arrow discs are amazing and the highlights for me are the unrated version. The commentary by Yuzna and Combs is a joyful celebration of the whole but the twosome of Combs and Abbott was my fav. Also the package is a joy with great artwork and cover image galore.

Getting Ahead in Horror – archive making-of featurette

Carnival Sequence – the cast and crew discuss this excised sequence

Perfect-bound booklet containing Re-Animator: Dawn of the Re-Animator, the 1992 comic prequel to Stuart Gordon’s original Re-Animator, reprinted in its entirety