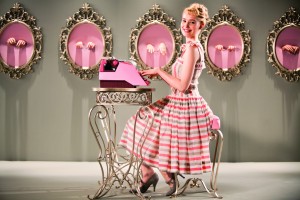 Régis Roinsard’s beautiful, colourful and extremely fun, Populaire, is the story of two people from completely different worlds; Louis (the always handsome Romain Duris) and Rose (the innocently beautiful Déborah François) who are brought together in the most normal of circumstances and yet embark on the most odd of journeys. Roinsard has taken the retro style of the 50s, accompanied by a rainbow palette of colour and mixed it with sugar, spice and everything nice.

Rose is a young, independent woman, who wants to prove that she can move to the city alone and make something of herself without her father guiding her every step of the way. If she doesn’t get out of the small village that she was brought up in, she would end up marrying the son of a local mechanic and living the life of a mundane, run of the mill housewife. This is anything but what she wants.

As was the tradition, women in the workplace became receptionists and when Rose is hired by insurance man, Louis, he doesn’t realise quite how terrible she is at her job. She misses things, messes things up and appears at the wrong time; but there is still something intelligent and sweet about her that forces Louis to keep her around. When one day, he finally realises what her true talent is; her typewriting skills. She is fast, unnaturally fast and calm when she is in front of a typewriter and so Louis manages to persuade her he will train her to become the world’s fastest typer, competing in competitions and winning accolades.

With any typical romantic drama, what both Louis and Rose don’t bargain on is what happens when teacher and pupil fall in love – and neither quite 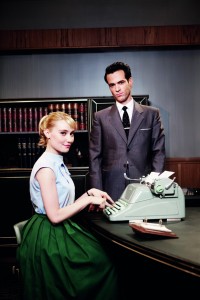 know how to react with one another. Throw in the fact that Louis is holding the candle for a lost love from his youth, the beautiful Marie (The Artist star Bérénice Bejo) and the abundance of father issues and you have one of the most successful romantic comedies of the year. The film, which could have followed a typical American rom-com, is filled with cool French drama, sexiness, colour and magic (something that many romantic comedies these days is missing).

Funnily enough, the ideas of Roinsard’s story are anything but typical of things that make for an exciting film; insurance, typing, father issues and yet mixed together with the incredible locations, the delicate costumes and the sterling script makes this high budget, romantic period drama a winner. It is similar to the Downton Abbey feeling, where the drama itself is rather circumstantial to the times and doesn’t seem like such a big deal when in actual fact its really rather telling of the time and allows the audience an incredible sense of escape with the most delightful of characters. Alongside Roinsard’s direction is Guillaume Schiffman’s cinematography, which is delicate and enchanting; filled with exciting colours and alluring symbolism.

The performances of the central two actors, Duris and François is something worthy of the classics; their chemistry is solid and they bounce gleefully off one another throughout the film. They have a style, which is reminiscent of some of the best romantic double acts in film history; Edward Lewis & Vivian Ward (Pretty Woman), Rick Blaine & Ilsa Lund (Casablanca) or Jesse and Celine (Before Sunrise etc). They have also managed to learn the precise ways to talk, walk and act around each other, with all the careful nuances of the era, whilst being witty and sexy.

We know from the very start of Populaire that Louis & Rose will end up together, but the fun of the film to seeing how they end up there. They take the typical twists and turns; realising they are falling in love, drama occurring that stops them from being together and then overcoming the odds in the end to create one of the most perfect, dazzling and captivating comedies of the year.