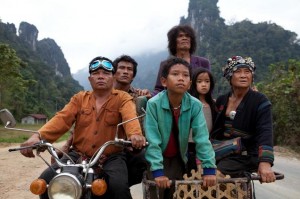 How To Make A Rocket

1. Good structure.
A rocket needs to be sturdy in order to withstand the heat and pressure of being fired into the air. The Rocket, a Laotian/Australian co-production by director Kim Mordaunt, uses a plot that feels familiar. Even as a young boy, Ahlo is believed to be cursed with bad luck after his twin died in the womb. When calamitous events seem to confirm this superstition, and he is forced out of his home into a ramshackle settlement by a hydro-electric company hoping to flood his village with a dam, Ahlo has to prove to everyone that he isn’t unlucky. It culminates in a big rocket competition in a nearby town. The father-son relationship, the coming-of-age arc and the final explosive showdown are all recognisable from any number of films about childhood. Yet as with rockets, this structure is then strong enough so that when all the elements come together, it can be propelled into something beautiful and exciting.

2. Gun powder
Essential to any rocket is something that burns bright and hot, and will explode when needed. Sitthipong Disamoe, in the central role of Ahlo, is the bat guano that sets the film alight (a metaphor that will make sense once you’ve seen the film). His performance holds the film, and crucially he delivers in the big emotional moments. Surrounding him are a group of equally gifted actors, and together they make the occasionally rote plot-beats ring with authenticity. Whether it is in forging a friendship with the eccentric Uncle Purple or in the tension with his distant father, Ahlo is a bright flame onscreen. It’s rare to see childhood evoked this convincingly, and there is something universal about his journey because of it.

3. Colour
It’s not enough for a rocket to explode, it has to explode with colour. One of the many great joys of watching The Rocket is in the world it drags you into. Shot and set in Laos, Mordaunt shoots a world that is complex, witty, reverent and unjust. Ahlo is forced out of his beautiful mountain home, and the places they stop along the way, and how they get there, are packed with drama and wonder. One sequence involving a journey in a cart full of rockets is nerve-shreddingly tense without making a meal out of it, while an abandoned village has an eery appeal to it. It’s a bright, beautiful nation full of fascinating people and strange traditions, and Mordaunt pulls you straight into it, so that when it reaches its explosive finale, it does so with the brightness and brilliance of the best fireworks.

The Rocket is out on Blu-Ray and DVD now