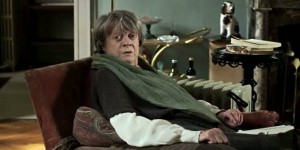 Israel Horovitz’ My Old Lady, based upon his own play is an unexpected comic drama, which tries and succeeds in both making the audience laugh out loud but also getting caught up within the drama of the world that the characters live in. The biggest flaw however is also it’s greatest success – and whilst the story is captivating, the tonal shift between both these genres is a little to drastic and happens literally on a turn of a sentence, which announces this story is no longer going to be funny but dramatic and challenging.

Sure, there is enough for Downton Abbey fans to get their teeth into if they just want to see the always brilliant Maggie Smith do some cleverly written quips for laughs, but there doesn’t seem to be enough care in giving the audience something to grasp and hold on to in the long run. The first act, is a hilariously told story about Kevin Klein’s (in a brilliant comic performance) character, Mathias, who comes from the USA to France to find out about the flat that he has inherited from his recently departed father, with whom he had a sour relationship at best. His trip to the flat is purely for monetary purposes as he has ultimately run out of it – he plans to sell the flat as quickly as possible and to return home with what the sale makes. But he doesn’t count on finding Mathilde Girard (Smith), an elderly lady living in the flat. When he asks for an explanation, Mathilde tells him that the flat is a viager – an old fashioned French system for buying and selling flats. Mathias’ father bought the flat for a cheap price on the condition that Mathilde could carry on living in the flat until her death. Of course, Mathias’ father left that out of the will and he realises there is little he can do. Things take a turn when he finds Mathilde’s daughter, Chloé Girard (Kristin Scott Thomas) also living in the apartment (after walking in on her in the toilet).

This is a full enough narrative in itself; Mathias is trying to figure his way around this law whilst ensuring he doesn’t upset or 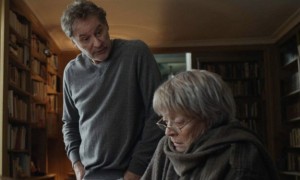 disturb the balance that is already settled in the flat. Chloé takes an instant dislike to Mathias but then again, she dislikes pretty much everything else around her as she finds herself in the middle of a full blown affair. The first half of the film sees Mathias, with nothing in his life, given permission to stay in the flat seen as he owns it but he must fit in with the lives of mother and daughter. Klein’s chemistry with Smith is great, they bounce from one another during their discussions, their arguments and their acknowledgements. In particular, a scene when Mathilde explains her meal times and doesn’t see the point in lunch is delivered with such flair and fervour that the audience can’t help but to fall in love with the characters.

The surroundings themselves are beautiful and quintessentially French – the Paris in Horovitz’ film is picture postcard. In fact the city becomes as important in the story as the characters themselves – Mathias moves around the city discovering hidden corners like the tourist he is.

But everything seems to take a melodramatic turn on a conversation spoken amongst the three; whilst at first it seems like an comedy of manners, it changes to become a somewhat intense family drama. Each of the three have their own secrets from their own lives and it is only a matter of time before these secrets come to light – but the biggest bombshell is that Mathilde had a relationship with Mathias’ father a long time ago. Over the course of the rest of the film the trio realise just how engrained in each others lives they really were and still are today and that without one another, they are nothing. Save for the somewhat modest Hollywood conclusion, the drama really does push each of these characters to the edge of their humanity.

My Old Lady feels like two different films, which have been somewhat stuck together in an awkward manner and whilst both films apart make interesting stories, one feels the end product feels weaker for it. This film features good questions of genre and it shows that some, just cannot work together.