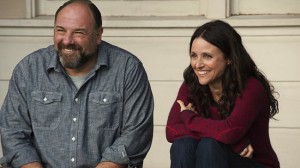 Enough Said is one of James Gandolfini’s final roles before his sad and tragic death earlier this year; thankfully the role is one, which a numerous amount of his co-stars over the years can be proud off because as the stories go, it is quite possibly the role closest to Gandolfini’s own personality. They can also be proud because he is half of the main couple in one of the funniest and most uplifting romantic comedies of the year.

Nicole Holofcener (who recently has been directing television episodes of Parks & Recreation and Enlightened) has carefully tapped into a new generation of rom-coms, where the leads are slightly older and therefore their characters are somewhat wiser (like Love Is All You Need, Somethings Gotta Give etc). These stories tend to find their protagonists a divorce or two down the line, they have already had their children and most probably own a house, so really they are looking for a second shot at true love but without all the stresses of early life – they are looking for someone to settle down with and really enjoy their lives.

Enter Eva (a hilariously brilliant Julia Louis-Dreyfus), a masseur who spends her time dividing her life between her 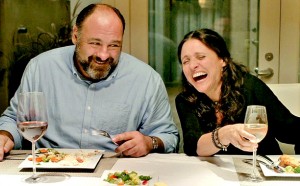 daughter, Ellen (an unrecognisable Tracey Fairaway), her selfish clients and her friend, Sarah (played by Toni Collette, who gives a sometimes heartbreaking performance). She hasn’t time for men or dates and sex really isn’t the first thing on her mind, but with Ellen leaving after the summer for college, Sarah and her husband, Will (Ben Falcone) really want to see Eva start to take control of her own life again and have a bit of fun. They bring her along to a party, filled with people she doesn’t know and just when she thinks she has had enough, she meets Albert (Gandolfini), a rather large, bumbling friendly giant who isn’t afraid to say what he thinks when he sets his eyes on Eva. Also at the party is Marianne (Catherine Keener), who instantly befriends Eva and wants to hire her as a masseuse. Their relationship grows, but it seems Marianne is more in need of friendship than Eva.

As fate would have it, not all is as it seems and there is a connection between Albert and Marianne that Eva really would rather not confront until it returns to bite her. 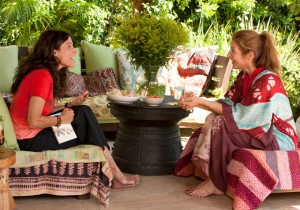 Enough Said is actually able to make the situations these characters find themselves in, really very funny, without making them caricatures of themselves. The film is interested in discussing openly divorce without holding anything back; everyone in the film (married or divorced) talks about their partners behind their backs and in some cases, in front of them. It is subtle in it’s humour without making an unrealistic fantasy tale (see most other romantic comedies) and is most interested in how you feel when you really fall in love later in life. The couple themselves aren’t perfect, as Holofcener is wonderful at illustrating; Eva is constantly second guessing and waiting for things to go wrong, whilst Albert has odd little quirks like not being able to whisper or playing with his food. But Enough Said is quite clearly suggesting that it is about getting past those issues because underneath it all, and if you allow yourself, it may just all fall into place.

What is most interesting about a film like Enough Said is the contextual connotations that each actor brings to the role; each of the main cast will be bringing things, which are infinitely bigger than the film itself and it is certainly difficult to not watch without thinking that Tony Soprano is dating Elaine Benes; Holofcener is aware of these and is quite willing to play with it further. As both are primarily known for television roles, the film nods to that through Albert’s job as a television archivist and even suggests a film like this couldn’t have been made without the careers of the two main stars.

Both Gandolfini and Louis-Dreyfus, do an extraordinary job; their chemistry is both satirical and sensual and the 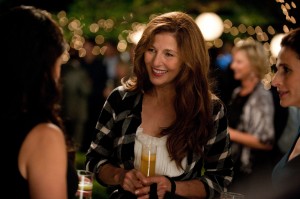 audience really do feel the love throughout the film as the relationship grows. Both actors are able to play characters that are on the surface funny and often sarcastic but there is an underlying sense of sadness and loneliness, which the film does not shy away from and quite often confronts. On screen they look great; the large frame of one against the very slight of the other makes the film so very pleasing to the eye because it proves that even the most unlikely of relationships can come together. Whilst Enough Said does follow the traditional schema of the romantic comedy, piling on the humour until the dramatic tension arises about three quarters in, it feels unique, original and hugely entertaining.

Hilarious, lovely and a delight to watch, Enough Said should be remembered as one of Gandolfini’s most successful roles alongside a cast who quite clearly loved working with each other.