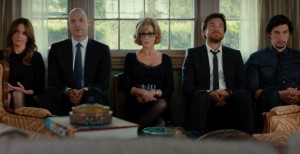 It is early into proceedings that one can imagine the pitch for This Is Where I Leave You; ‘look guys, there’s a book I’ve read. It’ll make us a tonne of money. It’s a comedy. It’s naughty, but don’t worry, it’s outrageous in the most conventional of manners. There’s loads of crudity, but underneath that it’s as anodyne as a mild cheddar sandwich. We’ll just distract the public – ha, the mugs! – with crassness’.

Oh dear, oh dear. It is hard not to allow the palm of your hand greet the centre of your own face when subjected to these generic, narcolepsy-inducing cinematic exercises. And yet, it could have all been so different. The cast is starry, with Jane Fonda, Jason Bateman, Tina Fey, Corey Stoll, Adam Driver and Rose Byrne all involved. The pedigree is considerable.

The premise is thus; Jason Bateman’s Judd catches his wife sleeping with his boss. In the meantime, his father passes away. With a life suddenly enveloped by differing sources of grief, he has to return home and spend time with his three siblings and their oversharing mother (Fonda). It was their ‘jewish atheist’ (possibly the smartest line in the film) father’s last wish that they honour his death in Shiva; the traditional wake period of seven days. They all baulk at the idea, for they are each distinct colours in their family rainbow. The inevitable hell breaks loose.

Bathed in bathos, This Is Where I Leave You plays out with character interactions that are as fake as Jane Fonda’s boobs (which seems to be the source of 40% of the jokes. It’s barely funny the first time). A tombola of crude words for genitalia and fornication are spun and hurled endlessly. Music cynically steers every single emotion in an overtly manipulative way. The climactic speeches between protagonists are ones that are recycled from other romantic comedies/family dramas. We have all heard these one too many times. 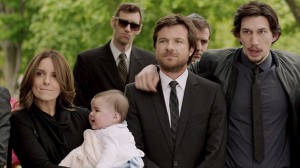 efficiently and with a rich hue. It is a work that may clutch all of the requisite tools for a genre piece, but it lacks personality. It is a tame and conventional comedy on a dysfunctional family. There couldn’t be anything more ironic than that.

Played too safe and played too broad, finally, its most heinous crime is that for a film dealing with the concept of grief, it ignores it almost entirely. For all of its feigned good intentions, it is as hollow as an empty coffin.

I’m not angry, I’m just disappointed. I’m surprised that that wonderful cliché didn’t make it into a script littered with them. Jonathan Tropper only has himself to blame. He wrote the screenplay from his own novel.