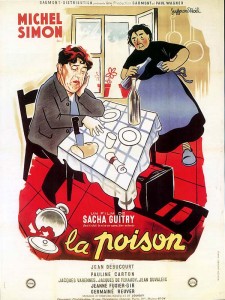 Eureka presents their latest edition to their Masters of Cinema collection, this time with Sacha Guitry’s 1951 French comedy drama, La Poison, which is set in the small village of Remonville where everyone knows everyone else’s business. One of the joys of this film is that instead of the usual credits, one comes to expect from a film, the director, Guitry walks through the cast and then the crew of the film and introduces them to the audience and what their roles are. This is a small addition to the film, but charmingly sets up what one is to expect from the rest.

As a satire on the state of marriage, La Poison, concentrates on Paul Louis Victor Braconnier (the hysterical Michel Simon), who is unhappily married to his over drinking, frog like wife, Blandine. He starts the film by complaining to the religious minister of the town. He explains that his wife is an alcoholic, is never happy and only washes her feet on rare occasions despite his best efforts to make a point by washing his feet everyday in front of her. The minister listens and hopes that he can help Paul in some sort of way but accidentally places visions of murder in his head instead. This is when Paul starts to plan the death of his wife, but unknowingly by him, his wife has bought poison from the chemists that very same day…

This is the first film by Guitry that I have watched, and I have to say that I was in hysterics throughout the film because despite the fact that it was made 62 years ago, it appears practically as relevant today as I imagine it did back then. The three main themes, which the film briefly and comically touches on is the state of marriage and how couples are ready to do anything to kill each other, the claustrophobic community who gossip behind people’s backs and the idea of sensationalism and the status of celebrity.

Paul hears a famous lawyer, Maître Aubanel (the hyperbolic Jean Debucourt) on the radio talking about his 100 acquittals and decides that this is the man, with whom he is going to plot the murder. But of course the lawyer is completely unaware he is going to be taking such a major part in the planning. In what is one of the best sequences in the film, Paul visits Maître to admit he has killed with wife and decides to lay out all the details of the murder. Of course, the audience realise he has done no such thing and instead is testing the waters, to see what method would be the easiest for the lawyer to get him off. During the course of the conversation he decides the poison would look premeditated and instead decides a knife would be better, but only if they can prove it was self defence, so he must have something thrown at him. The lawyer is completely wrapped up in the case and the thought that he could win another, it seems so cut and dry but first the murder needs to be carried out!

The script of La Poison is so sharp and witty, that generations of audiences can appreciate the delicacy of the jokes. Although they aren’t right in your face, they 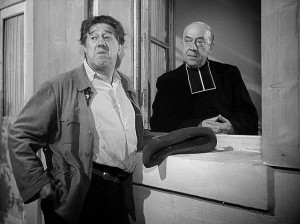 are very cleverly written and so well portrayed by a cast with a knack for comic timing. One of the other themes is the idea of community and it appears that nothing very much has changed in the previous six decades. Today we watch things like American Beauty or Desperate Housewives and we remember that gossip spreads and people love to talk behinds others back; it seems the same is shown in La Poison. In, what is possibly my favourite scene, right at the start of the film, one of the women of the village, Mrs Michaud (Pauline Carton) is seen flicking through the books of the pharmacist. She is checking to see what others have been prescribed and is working out from there what their ailments are. She explains that save her becoming party to town gossip, she would rather know straight away what is wrong with the people around her and then she can set the story straight – and tell those who may have gotten it wrong. This idea of knowing other people’s issues and talking about them seems as strong in La Poison as any film or television series today. 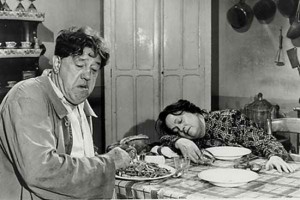 During the last chapters of the film, Simon’s acting really shines. Although in the first part of the film he seems weak and timid compared to his over bearing wife, once she dies, he comes out of his shell and revels in the fact he is going to get away with murder. He reveals his entire plan to Maître and explains (almost quite darkly) that he has to help him get off otherwise he will drag the lawyer down with him. Although he never really explains how he is going to prove the lawyers unknowing part in the murder, Maître is aware his reputation is on the line and accepts. Simon’s Paul become loud and obnoxious but also very clever and reasons with the court that if he hadn’t killed his wife, she would have killed him and therefore he was doing them a favour.

The restoration that I was watching from Eureka’s Masters of Cinema collection was on Blu-ray, and I have to say, it was one of the most beautiful and clear pictures I could ever expect to watch. It certainly did not feel as if I was watching a film made over 60 years ago, and it was throughly enjoyable to relish in the locations and settings in the film, where everything was sharp and clear. I had no issues understanding what was being said, and even with lower quality speakers, the sound was refreshing.

This edition also includes new subtitles, a booklet on the film including rare images and a documentary, On Life on-screen, exploring the film, Sacha Guitry and Michel Simon.

Founded in 2004, The Masters of Cinema Series is UK-based Blu-ray and DVD collection curated by Eureka! Films are presented in their original aspect ratio, in transfers created from recent restorations or the most pristine film elements available.
La Poison is released in the UK on Monday 25th February 2013