Lets all go to the lobby and get ourselves a snack…Like POPCORN perhaps? A horror comedy slasher that creeps over into something above the norm. When a school film society decide to put on a show to raise some money, it seems logical a horror / sci fi cult mix up seems ideal. It will make money and they can set it in a soon to be demolished cinema with all the electric shock seats, stink vents and bug flying devices enabled. Maggie (Jill Schoelen) is a part of this group, she has a link to a films and all. Suzanne (Dee Wallace Stone) is her mother and has an odd ball past. Cheryl (Kelly Jo Minter), Bud (Malcolm Danare ) and Mark (Derek Rydall) make up the rest of the group. As befits a film like this, the cinema is a lot more than it appears. 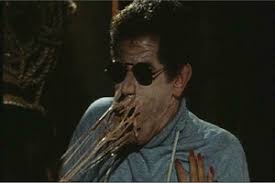 Shoot in Kingston, Jamaica. It swapped directors, had to acknowledge both and ends up just about crossing the line. Outside of that, POPCORN is actually a film that seemingly revels in its wonderful effects, silly script and cinematic nods to all of the films it obviously loves. This allows the audience to get in on the joke, as well as maybe also enjoy the film more. When we get to the plot points, they are executed in very obvious ways but we get that this is intentionally playing on troupes. It can be sometimes a little too knowing. However it is still a great watch. 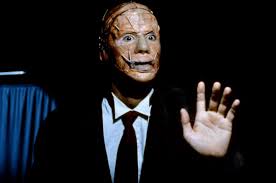 The 2K scan from Synapse should be applauded. I saw a VHS version which was awful. The commentary comes from the same source. Good fun but loses momentum. The really impressive thing I found was the making of. It attaches the fun on screen with a really traumatic situation on set.