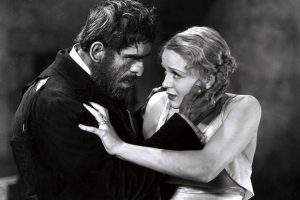 James Whale directed a series of Horror films that were filled with frights but also laced with sardonic wit and evil things galore! Rural Wales houses small plots of land, farming and back of beyond houses. A group of travellers on the road are forced into one after a storm. Morgan (Boris Karloff) answers the door. Mute and seemingly the butler of the place, fear beings to creep in. They are unfamiliar with each other and as they meet fears grow even more. Melvyn Douglas, Gloria Stuart and Charles Laughton settle in for the night and the dark hours that lay ahead.

James Whale has credited to his name the horror masterpiece Frankenstein. Top of everyone’s list (including mine are his two films, Frankenstein and Bride of Frankenstein. Both had deep rooted asocial commentary, as well as rye humour. Though this filmography is oblique, it doesn’t lessen his many films quality. Whale sometimes hits his stride with this merge of humour and horror. Unlike Frankenstein, which is often unsettling and honest, take THE OLD DARK HOUSE as an example. Sardonic humour clashes with menace and shadow. 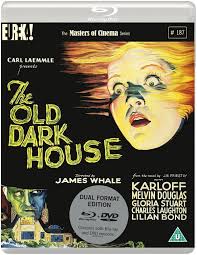 Funny how the first thing anyone has spoken of is the awesome Graham Humphreys cover. The transfer is that same from the cinema release. I have nothing to compare it to but the balance of light and dark, the grey scale and hallways seem to shine enough to warrant cheers! The top three extras are all the commentary tracks.  Kim Newman and Stephen Jones commentary is a detail laden, fun and insightful piece. The detail on Whale and Laughton’s work on the film (and its inspiration for Night of the Hunter  in particular is brilliant). James Curtis deserves a medal for the amount of information imparted in just over an hour…it is immense. Gloria Stuart on the other hand is a gentle and sometimes fascinating walk through Hollywood, film making and the era of Horror as behemoth!