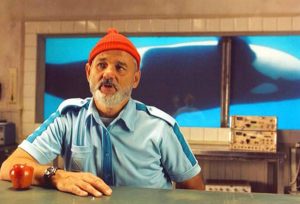 There is a moment in the audio commentary, compiled on this disc with Wes Anderson and Noah Baumbach, where Anderson suggests he imagines images and then fills it in with narrative. In THE LIFE AQUATIC WITH STEVE ZISSOU, you can almost sense that this is so. You have the ship, filled with visual wonder and captured in intimate and absurd detail. Then there is the rescue island or the sea scape itself. Steve Zissou (Bill Murray) is a world renowned oceanographer, whose latest mission is to find the Jaguar Shark. 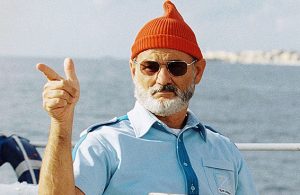 It may or may not exist but his team (called helpfully Team Zissou) is planning on exploring. The crew consists of among others Kingsley Zissou (Owen Wilson), Zissou’s long lost son, Klaus Daimler (Willem Defoe) his longest serving side kick and Eleanor Zissou (Angelica Huston) his long suffering wife. They and Zissou will not stop until they have searched ever piece of the sea, high or low to answer the question. 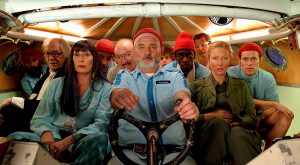 Wes Anderson has quite an offering within the Criterion Collection. We have the richly funny BOTTLE ROCKET, the cleverly sardonic THE ROYAL TENENBAUMS.  With THE LIFE AQUATIC WITH STEVE ZISSOU we have his first (and as of writing) only box office dud in his big budget films. I always liked Zissou more than these two earlier works in truth.

Its visually more layered and funnier than Tenenbaums. More irreverent in its gauge of the human condition than Bottle.

However it lacks a sense of itself in places. The Anderson form is to always be self knowing, which it is but it sometimes missteps with this. Becoming pastiche and failing to mark this as totally parody. This makes it hard to read for the fan of his work. They were and are very needing of directness and I find it sad that they didn’t see an auteur (for that is what he is) playing with his form and making us work a bit for it. 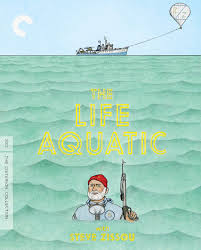 The restored transfer, not only approved by Anderson but with a DTS-HD Master, can only be called simply breath taking. Anderson colour pallete is a joy always but here it is refreshed and alive.The commentary by Anderson and Baumbach needs to be heard for their poking each other for information. From that line above to the discussion on animals and French cinema, its excellent. This Is an Adventure is the other high point. For a making off it is both playful and funny.