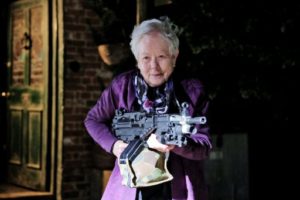 A meeting in a remote farm house.Its cosy but not like a palace or anything. More a farmhouse in a field in England or thereabouts. 8 people all sitting and waiting for a meeting to begin with the new group…well seven are actually sitting and waiting for this meeting. One of them is picking up a new introduction to the group. Then a man running through a woods. He thinks he is being hunted by something unseen but then…he remembers count to 5. If after that you are alive. Well you are alive and not something worse. Not dead exactly…more undead…more vampire…. 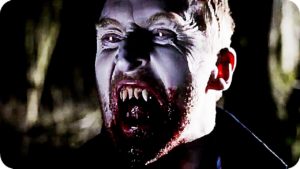 Comedy is a hard thing to do. British comedy is a hard thing to get as well. Undead or horror genres (to be more precise) are loaded with conventions and conformity. These traditions are ripe for satire and can often be easy to pick at but dark or black comedy is very hard to do right. Very hard to actually make funny or comical without falling into farce or worse still infant frat humour. The aim of the game is to go for Ealing comedy and not Danny Dyer fall about silliness. Director and actor Jason Flemyng  sets out to do just that with Eat Locals. 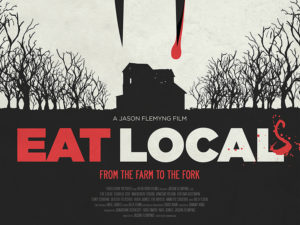 So does it succeed? Well in my opinion mostly yes. I ignored the critical opinions of Rotting Tomatoes and felt this. With sardonic swipes, satirical slaps, genre conventions parody, digs at political opinions and commentary on society packaged into its run time, it succeeded. With clever used on tone, pitch and gags it almost always has you chuckle and laugh. Its right on the money more than its off it. Overall its a feat of skillful, if not low budget film making that make this a must see film.