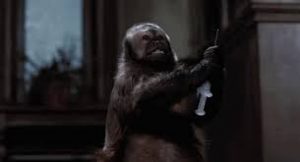 Monkey say, Monkey do. Well that is the old adjudge.  For MONKEY SHINES it would seem monkey does whatever to keep her man. Allan Mann (Jason Beghe) suffers a life changing accident and paralysed. His girl leaves him for the doctor that treated him. His best friend (John Pankow) gifts him a service monkey called Ella, to look after him and see to all of his needs.  She however has more than mere helping with the dishes and sets out on a bloody rampage. 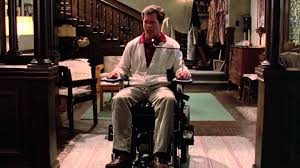 George A. Romero can be said to have had the second most profound influence on horror cinema behind Hitchcock. With Monkey Shines (his first studio film), you see a director wanting to fuse form over theme. He takes studio resources and enables a standard premise to ascend a few steps above its limits. 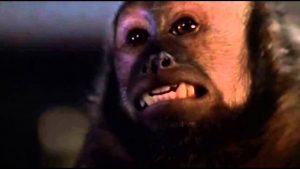 This said Monkey Shines does lack some of Romero’s more nuanced film making. Its less robust, lacks that killer commentary on evils of science (as I guess is its core). Though possibly Romero’s most co -herent film, it just loses what makes Romero’s core cinematic principle. Namely shaking a fist at the formula itself. 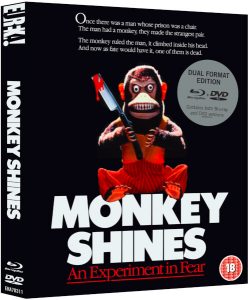 The best three features on the disc and set are found in the commentary by the man Romero. Always enjoyable but here he seems to underline the studio interference. The Alternative ending is actually better than the one in the film and worth a watch after the film. Finally it is the feature making of. All of those involved are ..well involved.