Saul Bass made only one film, PHASE IV. It might have never seen the light of day until discovered in 2012. Alongside the missing 40 minute part MAGNIFICENT AMBERSONS, cut scenes from THE DEVILS and the original STAR WARS pre Lucas buggering about with it, this was a most desired film indeed. 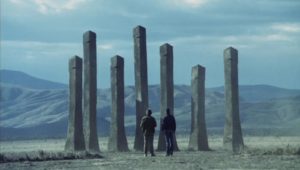 Solar storms cause strange planetary events. Ants seem to be the most affected. Arizona ants in particular, have started to hunt their predators. They first kill and then they even plot to rule. Over throwing the natural order. A desert lab is built to explore what is the cause. Two scientists (Nigel Davenport, Michael Murphy) have begun the experiments, when the ants attack and a young woman (Lynne Frederick) seeks help. 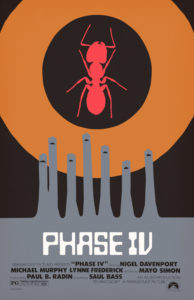 So I suspect you have questions? If you know this film or even its legend, then you know that their is a version that apes (excuse the in joke) 2001, Tarkovsky and Jodorowsky. Its not here sadly. Paramount seem to have lost that. Instead you get the core film and then a what might have been, something. Then if you look at the extras, you get a gift like no other. The original ending. The disc is worth the price alone for this. Fusing surrealism and the elemental, its a smash of symbolism. Bass seems to have allowed his inner self to create a human nightmare of the ant as king. Glorious. Take on board the second disc which has a list of great shorts of Bass to enjoy (his Bradbury film is the best by a country mile) and you have a disc that will remain rewarding forever.