Stuart Gordon was more than just re-animated corpses and falice faced professors. Here he guides a cast in the outer space version of ice road truckers. John Canyon (Dennis Hopper) is working independently, hauling what ever he can. When the ‘corporation’ ask him to shift a load of ‘sex bots’, he doesn’t ask. However the bots are not all they seem and things might not end as easy as he hoped.

A homage to B movie action and sci fi films are ten a penny. Stuart Gordon’s film feels like it ascends these tropes. Taking instead the surrounds of America and the industrial military complex. It becomes a blackly comic satire on the state of affairs. We have killer death bots, runaway corporations and intensive farming.

Gordon uses much of his gore drenched vigor in the clever model work and sometimes hones his craft expertly. He keeps the films tone in check. Its ropy elements (wires being seen) never unbalance the piece and Gordon underscores everything with great ambition. It might not be the best film ever but is a fun, if not occasionally absurd great. 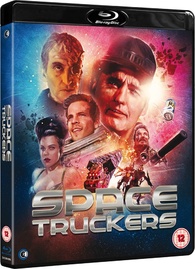 The disc contains a lovely restoration. The original film I did see on VHS and that seemed to disguise the opening effects and the wire work. Here yes wires are all clearly seen but it also makes that planet glow, rocks slide and stars shine. The interview with Gordon has the making of a study in B movie auteur talent. It is by long ways the best thing on the disc.