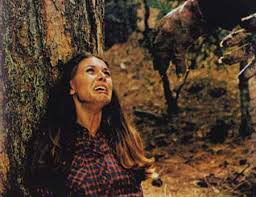 No one should go camping in the woods. At least this is what THE PREY central premise is. Middle aged, young and sexy teenagers or even say gypsy camp occupants. Three young couples decide to spend a weekend camping,  climbing, drinking and maybe even have a little sex. In the woods however, a horrible predator is loitering. A horrifically burned member of a gypsy camp that was burnt horrifically by a deliberate fire set at his camp. He was a child. He now is an adult. Roaming the woods in the dark, looking for another head to add to the list…maybe even something else…. 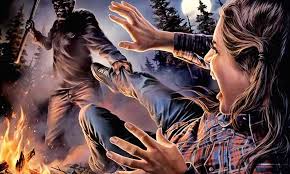 Edwin Scott Brown made THE PREY and was certainly not going to electrify the audience but it might just creep into the cult horror film fans database. This will allow it to have a richer and broader viewership. Which for a film better than its reception suggests, is always good. The original US cut, is short, sharp and structured. This from a film made shortly after HALLOWEEN is telling. Pacing is key to the execution (pardon the pun) of horror. Now yes it does have scenes that need to be trimmed but its the pulsing and beats that give it an edge. 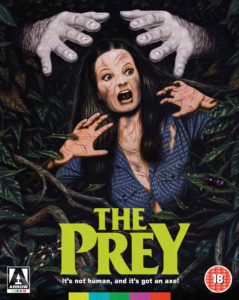 You get a lot of gravy with the meat of THE PREY blu ray. All of the three versions of the film are something worth exploring. As said above the first is a well paced and tailored beast. What the 2K restoration hasn’t done is sharpened up the image or its granular nature. This is a positive, especially with the nature footage that adds a creeping sense of impending horror. The best way of consuming it is via the commentary by Amanda Reyes and Ewan Cant on the film. It gauges the general critical reception and then really pulls out everything from the story, horror theory and the journey around the shooting locations. Which brings me to the In Search of The Prey. A great walk around (hike more like) the shooting locations and the world of THE PREY. It is interesting to see the space from a distance. 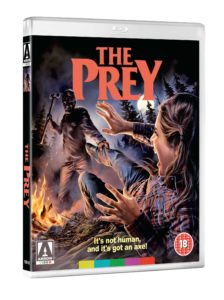 International Cut disc is streamlined but has been given a 2K wash. This has allowed the ‘Gypsy dream’ scene to come alive. So the producers spliced in footage (an additional 45 minutes of footage has a lot of baggage and tripe but thats me). The Gypsy scene gleans a lot of bite to a killer and as such it really is narratively rich. However it is rather elongated and less tight in execution.

My favourite is the mash up film. Composite Cut has a blend of the two films and leaves enough of each to make it the best version for film fans and film geeks…

DISC ONE – US THEATRICAL CUT