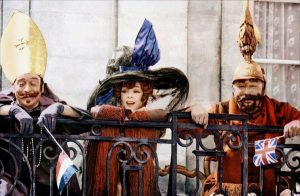 What does anti War cinema, satirical comedy and Alan Bates have in common? Well its the King of Hearts. A delicious blend of satire and war commentary. When Private Plumpick (Alan Bates) is given the task of entering a small French town to defuse a bomb. It is the end of the first world war and he sees it as a final piece of the madness. Chased into the local insane institute by German troops, he is able to blend in. On returning to the town, he finds all the previous inmates are now members of society. One is a barber, another is the mayor and one more is a general. But where is the bomb? oh the insanity… 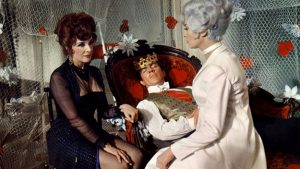 Anti War cinema has a deep and rich history. This is over spoken about and I will not go down that road. I will however speak about this films wonderful sociological satire. 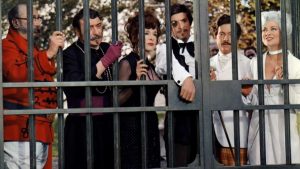 The enforced social roles, the ideas of class and what that offers in social position. I loved the notes of how the apparent insane, aping their ‘sane’ primates. Its executed with such wit and such consistent humour. This is the films real brilliance and the Alice in Wonderland exploration of all of this spills out so much detail. 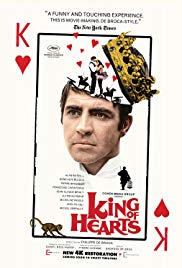 To the Eureka disc and its a story of a great transfer, thanks in part to the Cohen 4K transfer. The commentary from Wade Major actively takes the film to its historical position and then brings it forward. Its stylish and selective but its brilliant.