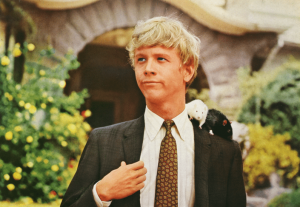 ‘Dont like rats do ya… well you won’t like what they do to you when I tell them’. Willard and Ben are two slices of American horror that can fit equally into moral tale, allegory for social harmony and creature feature. In Willard, Bruce Davison is Willard a young man who is living at home under the guidance of his controlling mother played by Elsa Lanchester. She lost her husband and his business due to some underhanded actions of a former employee and ladies man played by Ernest Borgnine. When Willard befriends a group of rats that are living in his garden, he extracts a dark revenge. In Ben, set directly after the end of the first film and a film that launched a song that was more oscar worthy than it apparently, young Danny played by Lee Montgomery is bored. He has no friends, family or life outside of his home. When he finds a rat that seems to understand him, he finds a friend. However this starts out okay enough, when bullies try to pick on him and rats come to the rescue but it moves onto other more increasingly violent attacks. These violent attacks lead to many deaths and the local police set out to finish off the rats once and for all…however can Danny’s friendly rat be saved before all is too late? 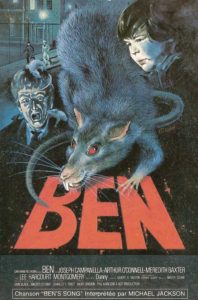 Willard and Ben are two sides of the same coin in truth. Both deal with the isolated males and the marginalised identity. Both are constructed with a nod to classical cinema and an eye for exploitation film making. However both are not as good as each other and this makes for an unbalanced take away for any film fan. So firstly to Willard. Its a classic tale of oppressed and repressed man, who after being expected to achieve doesn’t quite get there. It riffs on the notes of genre and convention. It dabbles in gothic but keeps a very moribund story. Its lead Bruce Davison of X men fame is well cast as a haphazard loser. He pratfalls and shucks all the way to the bank. Borgnine does what the film deserves and demands and hams up his role as menace and revenge object. He was always great as the soft guy and the hard guy. He could be polar and here he is to some effect. However it is the little nuances that make the film good. The bickering extras that domineer and demand. That lovely two way play of old lady wanting young man for her wicked ways is funny and played to be humourous and not unsettling. The rats made me feel uncomfortable but that is what they are there for. Ben and Willard have a relationship and you end up caring for it enough to end the piece with a level of success. To end it with a level of happiness.  the disc has a great transfer on the blu and the audio commentary is fun with Davison on good form laughing and adding to the scenes how he found it hard to connect but still did so. These two add value to the set and are what I would say are the high points of the disc and the better film of the two. 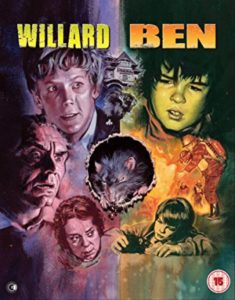 Ben on the other hand, falls down because it tries to beef up the budget but make the story static. This sort of thing was big problem in the period and within the genre. Make a sequel. Get more money. Make same story. Spend on more of everything. This forces the film to lack body and bite…so too speak and drive you away from it. The first film worked so well that the second was bound to fall. It however lacks little skill in direction, acting is weak and washes out the ideas that might be new like the idea of control and the parallel between a puppet and Ben for instance. I am sorry to say buy it but stick with Willard…