Hammer, the house of horror and British studio par excellence has an enviable back catalogue. Collected in this set are four films from the studio that include THE GORGON, FANATIC, MANIAC and THE CURSE OF THE MUMMY’S TOMB. These four are from the varied period of films produced from the 1960s and feature serial killers, monsters. mythical creatures and..well a rather motherly fanatic of sorts. Each one has been remastered to the highest possible standard, newly filmed introductions and documentaries have been added alongside a whole host of detailed extras that have been packed into them for the viewer to explore the films in greater detail. Then topped off with newly written words and illustrated sleeves to make them pretty on the shelf. 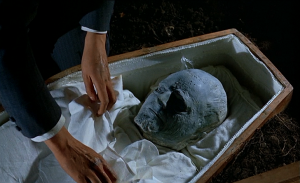 THE GORGON (Terence Fisher, 1964) begins the exploration of the set and is a tale that takes us to the reinvention of the greek myth, a professor turning to stone and his son setting out to find out why. Its visually unsettling director Terence Fisher was a talented film maker who understand fear, desire and the shedding of blood. The Gorgon is both easy to watch and packed with subtext. Sexual desire of a man lusting after a women. The power of a woman with control to upset social conservatism and social dynamics in a male world are just two themes at the edge of this film. The extras are superb with the top three being the commentary with the Daughters of Darkness. Insightful and a little bit of too much fun to listen too just once. The amazing Patricia MacCormack (I have worked with her and she is exceptional) piece on Barbara Shelley a must watch. Then the Booklet on the film is well worth checking out, if not just for the stunning images that are lovingly recreated in it. The print looks great and on a big scene that colour pallete is to die for. Literally.

MANIAC (Michael Carreras, 1963) is my dad’s a deranged murder man but now he is sane and you must get him out of prison classic. Though it skirts reality a lot, it still has the dark beauty of a man in too deep. When a young Englishman is left at a small French village, he thinks all will work out for him. You see he has eyes on two local woman. They however have a nasty secret that has a blowtorch and a taste for murder. Great print restoration makes the black and white shine. The extras however let this film down in my opinion. It deserves some solid reappraisal and instead gets what is little more than a absent response. I was saddened by this, although the film alone is worth a visit for anyone of the dark side of humanity bent or who likes cooking…flesh that is…yuck!

THE CURSE OF THE MUMMY’S TOMB (Michael Carreras, 1964) is a delightful yarn. Based on an old curse, wives tale, menacing truth, story to stop people nicking stuff…This sees a group of explorers who have taken a series of artifacts from an Egyptian tomb, come up against..The mummy. Its playful and occasionally brilliant in how it used little resources so well. A feat achieved often by the Hammer teams and this film marks that with a joyful fist in the air. The extras stand up to my average words. However I really like the Super 8mm version. I had a camera some years back and remember the joys of screening films after shooting them. It always gets me to see these. The print looks great and the colours are again so well balanced. Thankfully!

FANATIC (Silvio Narizzano, 1965) finishes off the set and is an undiscovered gem for me. Though it ends in an abrupt way but gets to that with vigour. When a former lover dies, a young woman goes to visit his mother and leave the next morning. The mother however doesn’t want her to leave. Dark and delirious it has the best features of the set as well as looking the best of the bunch. I have to say it was a find that I will happily watch again and again. If not for anything else, just for that great print work. The extra of note is The Tallulah Bankhead piece by Kat Ellinger. A lovely informed piece about her work and her energy. 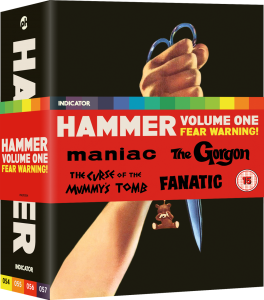