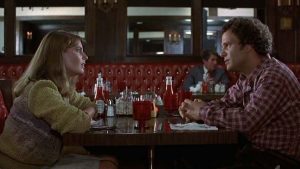 Relationship hang ups are, I guess not a modern phenomenon. In film we have always had this issue of man/woman likes man/woman, they fall in love and then descend into the inferno. Male and Females roles are also subject to gender norms and cultural expectations. Woody Allen for instance seems often to be more concerned with male experience and expectation in his films. This seems to endorse some in arguing that men for instance are vain creatures and often position themselves in a relationship to massage their ego.  Writer / Director Albert Brooks and his writing partner Monica Johnson seems to have understood much of this when crafting this 1981 film. What is presented here is a relationship that matches Allen’s films, in male experience. It also however seems to delve into the effects of this on the other person.

Robert Cole (Albert Brooks) is a film editor, working on a new science fiction film but feels completely unbalanced. He is in a relationship with Mary Harvard (Kathryn Harrold) that is coasting (at least he feels this) and decides to end it. Robert then spends the next few days, desperately trying to win back Mary. He decides that she is the one, she is his everything, she is worthy of a stuffed toy and many notes of apology. Robert is selfish, neurotic and so unable to accept his flaws that he keeps hurting the ones he loves. When him and Mary end up in a cabin together, it will all come to a head, or at the very least maybe all come to be wrapped around his ungrateful, self-involved head. 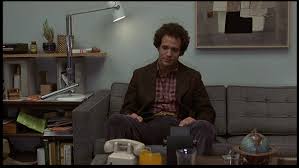 The Disc transfer is a HD remaster. I have not seen this before so can compare it to another source. What I can say is that it looks good. It has that warmish 1970-1980s cinematography and this allows those whites and pastel colours room to breathe. It also allows for the driving outside his house foliage to look deep green and light green across the day. The disc appears to have only a single extra of note for me, the commentary from Pinkerton. This is filled to bursting with tidbit info about the film, but I enjoyed the Albert Brooks, James L Brooks (no relation) conversation. L Brooks appears in the film as the director of Brooks edited sci fi film. Its very interesting to have the two discussed as fans of each other’s work. L Brooks comes in for a whole heap of flak about his work. The Booklet has a superb essay by Isabel Stevens on Brooks and his shape of comedy in the film industry as well. 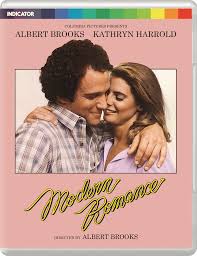