The great shifting sands of a personality are explored in this Antonioni masterpiece, newly released in stunning HD remaster. Television journalist David Locke (Nicholson) is making a documentary film on an unseen war in Africa. Now in the desert he is seeking an interview with rebel fighters. The hope is he will get an exclusive. All he seems to find is sand and rock. So when his Land Rover gets stuck in a sand dune, he has a breakdown and has to trek back to his hotel. Back at his hotel, Locke discovers that an Englishman, Robertson (Charles Mulvehill) has died overnight at the hotel. Locke and Robertson had spoken. They had been brought together because of the dunes and events. Now they will be connected by the merging of the self… 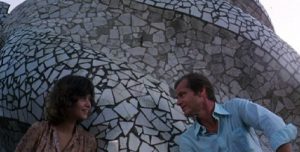 Michelangelo Antonioni made cinema his own. Visually layering ideas that were at once bold and potent. Themes about the self, society and technology. He saw the frame as a collection of objects, taking actors he saw as little more than objects to define what he wanted to say. Nicholson here is never really just an actor or an object. He never was anything the like of this.  He is a potent personality and a dynamic persona. He shines on the screen with a charisma and a charm all his own. So when the two come together they make a film which is quite simply exceptional.

Its not only a commentary on the self but also a film about the world of post war. A world that is ancient and modern. That is evolving and exposing. A world that is at once two things inside a single body. A contradiction in terms. I love the film for so many things. From its visual landscape to that feeling of immediacy. Nicholson fits the model of an Antonioni lead because he is a strong visual presence but he also gives it much more. He layers a performance that narrates a man who is exposed to a fracture of identity, with the theme of spilt. 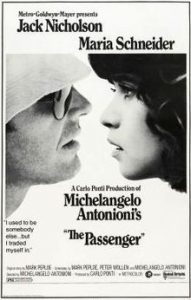 HD remaster makes the film come alive. Antonioni films are about the visual constructs. Visually definition is key to understanding what is being said. The mono audio has been cleaned up compared to that DVD version. The alternative titles are for the pure film person. They do not make it more than an experience in Italian. The commentaries have been seen before but must be heard again. Nicholson commentary from the DVD is a stunning listen. He gives us background but also gives us Jack. The Peploe / Irvine commentary underlines the script and visual differences, which crafts a thought via extrapolation in the art work. Martin new commentary is excellent. It has a flex to it so with all three back to back you are submerged in the films brilliance. Jenny Runacre and Steven Berkoff give us the touches of film maker and film that give us notes but added less than they should for me. Profession Reporter is a conversation with the master and must be seen, alongside everything else he works on in the set. The booklet is a masterwork and its highlight is Amy Simmons. However the whole booklet is a tour de force… 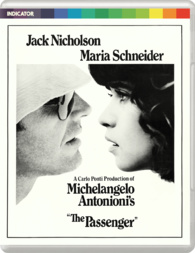