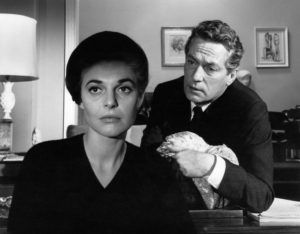 Spiralling between the reconciliation and establishment of a relationship, The Pumpkin Eater is all performance but lacks heart in its final act. Jo Armitage (Bancroft) is a woman with a number of children, coming from two failed and one ongoing marriage. She becomes absent, depressed and withdrawn after discovering her third husband  Jake (Finch) is having an affair. We see her happiness at meeting him, their life of hope and new houses. Jake’s infidelity merges with his stability and persistent reliability. Successful writer and father but why is it that Jo cannot return to the world. Why is she so withdrawn from a world that could offer her something much more. Why is she so absent in hope? 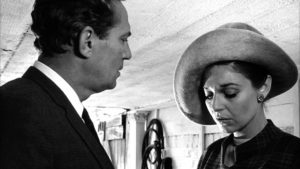 Emotional violence is a very hard sell. It is often navigates the path of mental annihilation and this makes people tired or worse emotionally empty at its end. The problem is that you are experiencing the emotional movements that can be related to by you. The Pumpkin Eater is one of those films. It rolls over you as it unfolds like a constant nightmare. 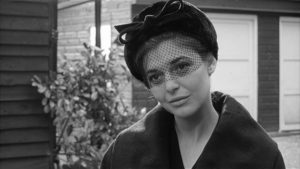 For me the problem was the deep sadness in Bancroft’s eyes. It does drain you and after 2 hours it exhausts you. The film is powerful and potent. It is also so intensely upsetting that you might find it hard to shake off. You can understand pain, like so much overwhelming feelings. However you can also understand love and you can surely understand betrayals weeping despair. Its awfully hard to ignore. 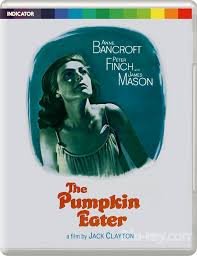 The extras are very good. However the blu ray is only a small step up on the scale of things. Jeremy Mortimer on Penelope Mortimer (2017) stood out for me as a wonderfully tailored extra and the commentary is well researched amidst so much great work from Indicator.