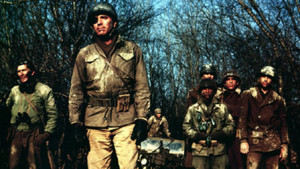 A castle in the French border regions. A count living as if from the glorious imagined past appears. He who has seen both sides come and go in this war, navigates a new force. this forces is a group of American GIs that have stumbled across this new defensive point. One wants his ownership and title protected by this force. The others want to see the war out, without death and injury. Unknown to them, they have the Battle of the Bulge about to take place and change their lives forever. First they must navigate the castle and its town beyond.

Sydney Pollack is a director who I have both awe and respect for. He understood performance and directed with an eye for beauty. He also found the comedy in the everyday lunacy that we all live in. This film plays on the surreal and absurd. Its also plays on the eras irreverance to class and society. The American system crashing into a land far older and far more concrete in position and place.

I would have it that the satirical notes of the time work within a reference point. Its a Vietnam war commentary that uses one war to expose another’s flaws. It sadly however fails and becomes bogged down in this absurdity. The obsession with visually surreal aspects, undermines the satire. It keeps running over the abstract in a way that would have related then but have lost us now. This means simply that the viewer might be unable to examine the film with clarity. To watch a film like this you need context and contrast but also history.

The Blu ray has to again be giving credit. Powerhouse are the current masters at what they do. The HD master looks great with little damage noticeable. The colour grading is excellent and the hues are sublime for the hard colour scenes. For me the interview of Eastlake is superb and the highlight, alongside that commentary with Lancaster. Also to seek out is Brad Stevens essay that gives insight that is valuable to the films understanding in a modern context.