To speak of this box set, we must discuss the trials of those looking to see Schrader’s masterpiece prior to this release. You see before this release, you had to watch this via an American Criterion Collection version. Though very much worth it, finally a collective sigh of relief has been expelled as finally we have a region B version.

Director Paul Schrader admitted to being obsessed about making a film on poet Yukio Mishima. Mishima suffered for his art. Some suggest he became consumed by cultural traditions, sexual desire, social position or even fascistic contradictions. On his final day, he stormed a military base and committed public seppuku. However This film explores his art at the point of his death. Flashbacks slice across his final day and seemingly his art and life blur. Playing with style, exposition and themes.

I have already stated my utter love for this magnificent film that is a visual as well as narrative feast. Schrader becomes more than just the constructor of a biography. He contrasts a creative with his works and his existence. Light for dark, thought for action. Add to that Phillip Glass score that is on par with great singular pieces from Williams, or Elfman. Big in scope, tone but not extracted from his canon.  The disc however needs far more appraisal. 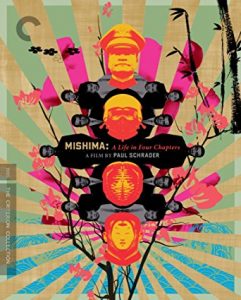 The 4K transfer is a leap above the DVD release. In a word, VIVID. The colours are stunningly rich and deep and stun. The 2008 commentary by Schrader and Poul captivates because it is passionate. It exposes every detail of Mishima’s life and work. It also proves Schrader needs to be consumed slowly. The Strange Case of Yukio Mishima is as good a documentary about a person, well covered in past works you can get. It grounds, gives an overview and maybe even reveals as much about the power of film making and writing.