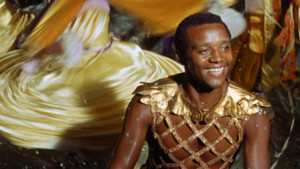 From the moment Black Orpheus bursts to life, with its bright, inviting array of colour and its surge of bossa nova music, it immediately establishes itself as a lively experience. By taking the well-worn Greek myth of Orpheus and Eurydice and throwing twentieth-century Brazil during the madness of Carnviale, director Marcel Camus’ crafts an often thrilling, singular vision. The film was a massive success upon its release in 1959 with critics and audiences alike, winning both the Palme D’or and Academy Award for Best Foreign Language Film. The film is released on Blu-ray this month courtesy of the Criterion Collection, which really brings the films dazzling music and visuals to life, while including some valuable special features.

Breno Mello plays Orfeu with impressive charm and charisma, and it is easy to see why every woman in the film is charmed by him. Marpressa Dawn, who plays Eurydice, brings an undeniable magnetism, and it is almost impossible to keep your eyes off of her. The pairs chemistry crackles on screen and really helps add to the films key romance.

While Black Orpheus does have a plot, it is certainly secondary to showcasing Rio’s Carnivale. There is a constant rush of music and dance, and a distinct sense of rhythm is omnipresent. Camus’ camera films the dance sequences with aplomb, bringing through an effervescent energy that makes the film highly engaging. It is always impressive to see a film made decades ago that feels wholly unique, and Black Orpheus is certainly an example of this. The film possesses such a remarkable vibrancy, and even in the films quiet moments (of which there are few) there is a distinct sense of energy. The camera is able to capture not only the excitement of Carnivale, but also the chaos and confusion. This is never more beautifully expressed than in the night-time Carnivale sequence, which is a real tour de force.

However, while the films energy, beautiful music and colourful, visually inventive shots are thrilling, the lack of significant plot structure does prevent Black Orpheus from greatness. It offers so much in terms of sound and visuals, that it is a real shame more time was not devoted to strengthening the story. Though this is somewhat rectified by the equally hopefully and haunting ending, a lack of cohesion prevents the film from a greater emotional impact.

Thankfully, top-class work from Criterion means that all of the films visual buoyancy and music are delivered beautifully. Despite some very slight signs of aging, the image is clear and the contrast levels are impressive. The colour scheme remains vibrant and enticing. The uncompressed monoaural soundtrack is particularly impressive, featuring clear, easy to follow dialogue, and the musical score is wonderfully balanced. 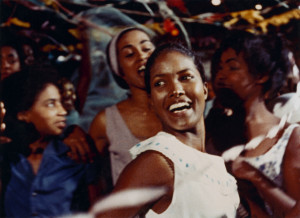 Despite the disappointing lack of an audio commentary, the Criterion blu-ray still comes with a solid selection of special features. There are brief interviews with director Marcel Camus, and a rare interview with actress Marpressa Dawn. An interview with Brazillian film scholar Robert Stam highlights the films importance, while addressing some misconceptions. There is a lovely piece discussing the film’s legendary musical score, and how the film popularized bossa nova. Furthermore, there is a feature-length documentary on the making of Black Orpheus featuring plenty of informative interviews. The film is a classic, and with a great blu-ray treatment, deserves a home in every cinephiles collection.