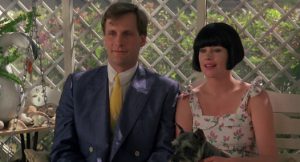 Jonathan Demme film inspired many but left me a little under whelmed. When straitlaced businessman Charles (Jeff Daniels) meets Crazy girl around town Lulu (Melanie Griffith) in a down town cafe, it seems an odd pairing. Then of course, his running out on a check is not what you expect from a rich guy like him. Lulu sees something in Charles. Something weird and free, that he doesn’t see in himself. Lulu wants to get to know him. Get him to know his weirdness. They spend the afternoon in a cheap hotel, getting to know each other. Then the rest of the day they spend together. Meeting her mother and making dreams up about a life not lived quite yet. Then they move onto a school disco. Its for the people that graduated there 10 years past. However when they meet Ray Sinclair (Ray Liotta) Lulu’s old boyfriend, it becomes stranger than fiction. 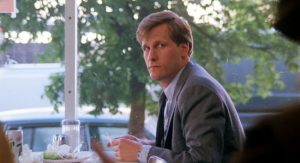 Odd couple films have been around since cinema created stories. Jonathan Demme’s Something Wild is a another addition to this convention. Another go at this old set up / pay off. Demme who had worked for Corman in exploitation and had 6 years prior to this made the excellent Melvin and Howard, came to this with motivation. The film he left is by turns, funny, silly, heart felt and emotive. Daniels plays the straitlaced young Charles with reserve. Griffith prove that she has always been an under appreciated actress. With wit and bite. Liotta is a tough guy with heart and pulls it off. Demme imbibes the film with his eye for Americana. His odd everyday. The world around which a country was made and lost. 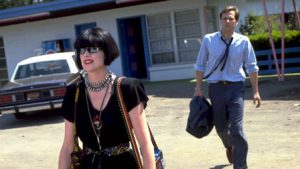 If only he was alive, his take on Trump would be caustic and prescient.  The only problem here is the script. It is  oddly balanced and feel like a see saw that cant quite tilt to one side fully. The first act drags. Not the fault of Griffith or Daniels, they are brilliant. The fault of a script that wants to crash two people together from other sides of the tracks. Then build a relationship.  Without factoring the other events it wants to develop. Once you get into the school disco and the second act, it flows with style and swagger. 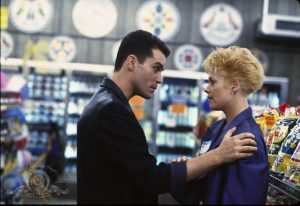 Music course from the soundtrack like hymns from a church. The surrounds are lush and green, out of town and odd (Demme loved this normality) and it reaches into your heart a little more. It also gives us something to fight for, yearn for. This is why the film in the end works and works well enough to last. Some have stated that this is mindless fun. It is and that is why some might become at least a little unsure at to what it achieves and what it doesn’t. Remain calm when you are watching and disengage the brain of sense and logic. 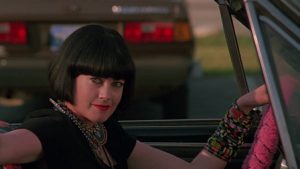 To the Blu ray you are about to buy. Well it is not packed to the brim with features but what is there is well worth a look. Firstly the transfer. Having nothing else to compare it to I can only go on the screen. Colour, hue, tone and clarity are great. HD has a mixed response from me but it has done the job here. As has the soundtrack, which needed a great transfer and got it whole hog. Musically it shines with a touch of rhythm and funk. The booklet has a piece from David Thompson, the documentary film maker. I interviewed him and found him to be a warm and very knowledgeable film lover. I disagree with his conclusions on the film but his written words are so worth reading it is hard to escape not being drawn in and informed. 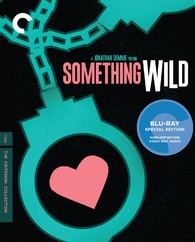