Bringing new meaning to ‘Rhapsody in Blue’, Paul Thomas Anderson’s 2002 romantic comedy Punch-Drunk Love is released on Blu-ray this week courtesy of the Criterion Collection. Aiming for a lighter, easier to watch experience than his previous film Magnolia, Anderson created what may just be his finest film: an airy, perfectly paced love story. The Criterion release combines a brilliant film with sublime audio and visual presentation, and a package of enticing bonus content, making this one of the must-own home video releases of the year. 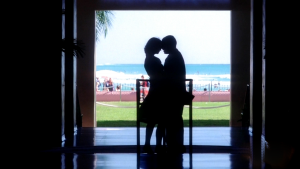 A joyously off-kilter romantic comedy, Adam Sandler stars as Barry, a novelty toilet plunger salesman, whose time is consumed by collecting pudding cups to exploit an air miles promotion, as well as his seven nagging sisters. Barry, riddled with anxiety and a wild temper, inadvertently attracts the attention of his sister’s co-worker Lena (Emily Watson), who holds the promise of a new, more fulfilling life for the both of them. This new future is threatened when Barry falls prey to a phone sex line scam, run by a wonderful Philip Seymour Hoffman.

In a long list of things that make Punch-Drunk Love such a special, enthralling experience, Sandler’s performance is at the top. In his first dramatic role, Sandler delivers such a beautiful and naturalistic performance, showcasing such versatility that its just about possible to forget that this is indeed the man behind films like Jack and Jill. Barry, despite being a particularly challenging character, is made instantly empathetic by Sandler, and this really allows the film to soar.

Colour is such an essential part of the contemporary film experience that it’s easy to forget just how significant a role it plays. In Punch-Drunk Love, the colour blue is used to a deliriously hypnotic effect. While the film largely takes place in the confines of a warehouse, the space is designed remarkably, and the mundane aspect of the space meets head on with extravagant blues, making a typically boring space feel engaging.

A great deal of credit is also due to composer Jon Brion and writer/director Paul Thomas Anderson. Brion’s almost-

futuristic score makes the film come alive. A beat never feels out of place, and brilliantly adds to the sometimes zany, sometimes frightening, and always euphoric feel of the film. Then there is Anderson, who has paced Punch-Drunk Love to absolute perfection, and its brief 95-minute run-time feel even shorter, and not a moment is wasted.

Sound plays such a vital part in the success of Punch-Drunk Love, and it’s wonderful to see such a masterful audio presentation on the Blu-ray. The sound is perfectly balanced, and every softly spoken word is perfectly clear, while its noisiest moments never feel too loud. The same praise can be lofted upon the stunning 4K digital transfer, supervised by director Paul Thomas Anderson himself. The sumptuous blue colour palette is as appealing as ever, and everything simple sparkles in high definition.

The special features are also plentiful. Though the lack of a commentary is somewhat surprising, there is enough material here to make up for it. Some of the highlights include Blossoms & Blood, a short film by Anderson, a fascinating interview with composer Jon Brion, who goes in-depth to explain some of the musical choices, and the entire press conference from the Cannes film festival. Most unique, (and it really speaks to the level of depth Criterion go to to ensure a high quality release), is the inclusion of an NBC News interview from 2000 with David Phillips, the man who inspired the pudding cup plotline in the film. All in all, the Criterion release is every bit as masterful as the film itself. This is an absolute must-own for Paul Thomas Anderson fans, and anyone interested in great films.