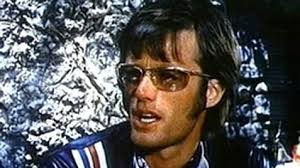 They went in search of America and couldn’t find it anywhere…Wyatt (Fonda) and Billy (Hopper) complete a drug deal with a connection in LA. Money has given them the freedom to live. They set out to find what is left of America. They stop over at a local farm and eat with a family. The family have simple things and ways. This appeals to Wyatt but also scares him. They decide to venture into towns and are rejected by locals, they ride across the country on two bikes looking for a place to stop and a life to lead. 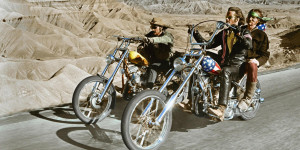 The dream of indie cinema was to free people from the chains of the studios. This began with Easy Rider in America and it totally altered the discourse that was running in the film community. It allowed the young to have a voice and to talk about the things that mattered to them. Freedom to have their world observed and not the paternal, empty voices of the studio. Drugs, sex, violence and heroes directed by nothing other than a desire to move on from one space to another. 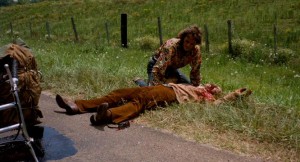 Now I have screened this film to current audiences and they have always seemed less than impressed. The reason is that the film has a mysticism around it. It is seen as the above and this means that many held it (at the time), in very high regard. Throw that baggage away. You must watch it as a film and take it as it is meant to be seen. It is a generation standing tall and screaming to be heard. They want to talk about what mattered to them after everything else had fallen apart. This film does that and how. 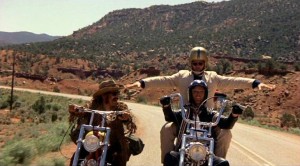 Now Criterion are amazing. I have been a fan of their US releases for a very long time. This is an exceptional produced Blu Ray and a superior version to previous releases. This is not only because they have given us all the US extras but it is because they have made the navigation process so intuitive. You will love the way the film looks, sounds, the commentaries, the docs on the film and the little titbit from Cannes 69. Simply put…BUY THIS DISC

Restored high-definition digital transfer, supervised by director of photography László Kovács, with uncompressed monaural soundtrack on the Blu-ray
• Alternate 2.0 and 5.1 surround soundtracks, presented in DTS-HD Master Audio on the Blu-ray
• Two audio commentaries, one from 2009, featuring actor-director-writer Dennis Hopper, and the other from 1995, featuring Hopper, actor-writer Peter Fonda, and production manager Paul Lewis
• Born to Be Wild (1995) and “Easy Rider”: Shaking the Cage (1999), documentaries about the making and history of the film
• Television excerpts showing Hopper and Fonda at the Cannes Film Festival in 1969
• Interview from 2010 with BBS Productions cofounder Steve Blauner
• Theatrical trailers
• An essay by film critic Matt Zoller Seitz