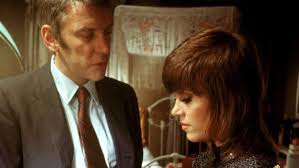 A ‘finally’ is audible among the murmur of Blu Ray enthusiats. For they have heard that KLUTE is to be released on Criterion Collection. A film that is as legendary, as it is noted for its award wins. Set in the America during a period of paronia and Vietnam malase,  John Klute (Donald Sutherland) is trying to find Tom Gruneman. He was a friend and a rich Pennsylvania chemical company executive. One day in summer he simply disappeared into New York City. Six months of failed searches have seen Peter Cable ( Charles Cioffi), assign him the job. The only clue is an obscene letter, found in Gruneman’s office. It was addressed to a prostitute in New York City called Bree Daniels (Jane Fonda). She received several similar letters. So Klute rents an apartment in the basement of Bree’s building, taps her phone, and follows her Will she lead him to Tom or will it be another dead end? 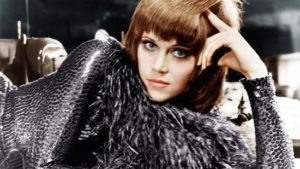 Now I know you, like I ove KLUTE. So I will dispense with the review of the film. Or to be more simplistic, I will say its a sophisticated, emotionally charged, neo noir about the things that we hide. It has two sublime performances. One stripped back and the other revealing and electric. Great direction by Alan J. Pakula, great cinematography by Michael Chapman and a studied script by Andy Lewis and David E. Lewis (latter day Epsteins). Ok so you may, like me, have had the DVD release of KLUTE. That was not a stellar, shining moment for DVD. Reframed and pan and scan, it made for some awful vieiwing. This is a stunning piece of cinematic salvation by Criterion.  The new 4K digital transfer keeps the tonal and lighting ranges of the film but it also highlights the shifting colour pallette and clears up the close up shots, as well as some of theose delightful process shots (wide, two and on the phone for those who want me to name them.

New conversation between actors Jane Fonda and Illeana Douglas. The first extra sees Jane Fonda talking to Illeana Douglas. That would seem like an odd choice to some but t proves a profound mix. Fonda talks with charm and intellegence. Her age has allowed some for sight in her prep work (with madams and prostitutes in New York to understand the life and motivations.) But the real skill is that Douglas lets her talk. Lets her words breathe. In a personable way. 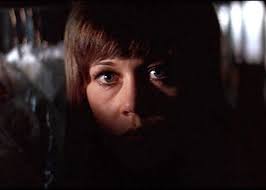 New documentary about Klute and director Alan J. Pakula by filmmaker Matthew Miele, featuring scholars, filmmakers, and Pakula’s family and friends. An easier sell across the board. It is not as interesting as the previous feature but its stock detail and some talk about Pakula in a clinical way. However, it proves interesting when it gets to the shooting of the film.

The Look of Klute, a new interview with writer Amy Fine Collins. Is the best thing on the disc and no mistake. Not only because it de constructes the visual but it is that Collins is a god send of detail, thought, idea, texture and notes. This makes the piece a must watch.