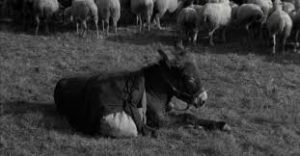 Life is all most always a navigation of pain and anguish. This is one of the messages from Robert Bresson’s masterpiece. It is a viewing experience that is incredibly weighty but still connects to primitive emotions within us all. We all live with a desperate sense of belonging. The journey of an animal who becomes a simply pawn in the lives of a local community. From farm worker to source of transport. Sometimes tortured, sometimes adore, often left isolated from warmth or human kindness. AU HASARD BALTHAZAR is a film that lives in any film maker or film critics list of films that have profoundly changed their film viewing lives. I saw this first some twenty years ago and it left me with a deep respect for a great film maker. Bresson’s knowledge of personal suffering, reflection of the futility of it and the lack of empathy of for other sentient beings, is profound. 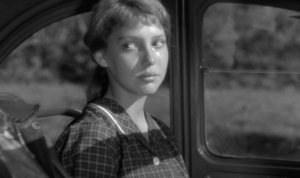 Starting from his being taken from his mother as a young calf, Balthazar is a donkey who is being passed from one owner to another. His closest human connection is with Marie (Anne Wiazemsky). She lives on a farm in rural France. She is a shy and tender girl, who loves Balthazar. He is passed to Gerard ( François Lafarge) when Marie family run into financial difficulty. He is brutal and uncompromising to the animal. Though Marie is seperated from Balthazar, the young woman and the donkey live almost mirrored lives. From the deep hardships that are riven in daily struggles. From losing jobs, beaten, abused and then emotion connections of the world. Although Marie and Balthazar often encounter cruelty from the various people they meet, they also find small moments of hope in these times of despair. 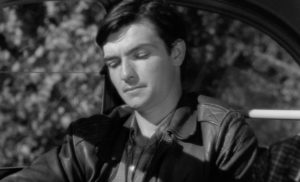 Now many a film critic and film theorist have discussed AU HASARD BALTHAZAR. I can add slightly to that in a very shallow way. It is a film that askes some very comprehensive questions of the nature of responsibility. Avoiding the sentimentality or vaneer of cinema, Bresson (known for driving his cast hard and filming scenes repeatedly) pulls off a stunning portrayal of humanity. Its not all despair but it is defused with moments (like life) of joy and wanting. This in the end is the hardest part of the film. As it is so true to life that it is hard to avoid connecting to it. 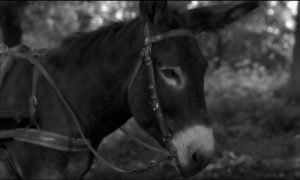 Now Donald Richie really uncovers this in his interview. His words are beyond mine, in that he analyses the work of Bresson and his Catholic connection to the film. Un metteur en ordre: Robert Bresson is better (as it is longer) and speaks to three great film makers. Godard in particular is clear to why he loves the film. Its truth. Cinematic Veritie. What more can you say. I didnt see the essay but I need to confirm something about the New 4K digital restoration. Well from the medoicre transfer from the DVD, this is a leap up. Like the finding of an island to the landing on the moon.