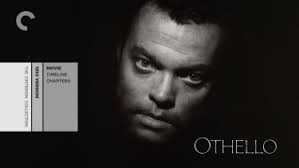 Having crafted productions of the bard before on stage and radio, most notably Julius Ceaser and his all black cast production of Macbeth. Welles moved to cinema. His lack of success with the masterful Citizen Kane and The Magnificent Ambersons lead him to direct Noir films. However after the success of Olivier (the greatest British Shakesperian actor of them all) with Hamlet, Welles had his chance. So he directed Macbeth. Where he played the lead Macbeth as well as directed and wrote the screenplay (only Welles could rewrite the greatest crafter of the English stage). Republic Pictures were unimpressed and cut the films to pieces. Welles left America for Europe to film the bard again. After the initial producer filed bankruptcy, he would spend 3 years shooting OTHELLO in Morocco and Italy with a shoestring budget. Welles dives inside the whole of this in Filming “Othello,”.

Othello (Welles) is a favoured sailor, trader and warrior. Rich, strong and bold a human he has much reason to be brave enough to stand up to anyone. He has saved the Venetian army on numerous occasion and has been made a general in the Venetian army. He loves Desdemona (Suzanne Cloutier) the daughter of a senator named Brabantio. But it is a love which is not approved of by family and society. He is a Moor (an Arab), she is an Italian Christian woman. They marry in secret. His ensign and friend Iago ( Micheál MacLiammóir) is plotting in the background. He sees the chance to distabilise the power of Othello by attacking everything he loved. That is of course Desemona. 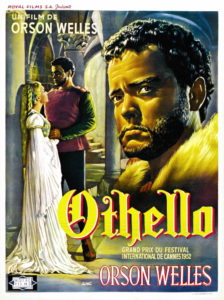 I could of course draw out the analysis of OTHELLO or Welles. Both have deep, rich texts on their histories, craft and cultural resonance. Hundreds in fact. Many far more interesting then what I could do in a limited space here. That said, what is important is to understand what marks this version from others. OTHELLO is a visual complex film (something you expect from Welles). He films in enclosed spaces, of old forts and empty towns. Canted angles unbalance the man and the world of scheme and loves dream. He uses space as if it were enveloping the cast. Even with its financial restrictions, it is easy to see why the initial producer choose him to craft OTHELLO into a cinemtic opera. Welles biographer Simon Callow even discusses this. Callow also notes (as does Mark Cousins in his documentary on Welles) Welles felt connected to both Shakespeare and powerful, yet ultimately flawed men. 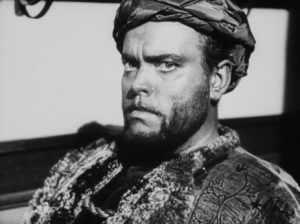 He might have felt he saw himself in one and I would suspect Othello reflected him. If not reflected him, it at least reflected his less personality.  Audio commentary from 1995 featuring filmmaker Peter Bogdanovich and Orson Welles scholar Myron Meisel, rolls over some of this. It sees Bogdanovich (who spoke to and befriended Welles) talk about how Welles liked the big roles, often as they were to reflect his bold stance and isolationist in the art world. He was a man who had a small group of supporters. Maybe the tragic way Othello life is not his own and his agency is simply to be trapped into a failed destiny, is more telling then many have stated about Welles. 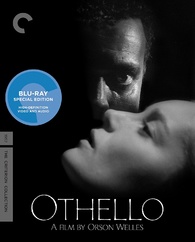 The film and its extras are split across 2 discs. The first has two version of the film. European and US/ UK cuts of the film. New interview with Welles scholar François Thomas on the two versions discusses the differences and what they mean. Something that each native audience understood. Now we have a glorious 4K transfer to salavate over on both. The cinematography of the opening scenes are stunning. Black which is rich and deep. No colour leak or colour light over it.  Return to Glennascaul, a 1953 short film made by actors Micheál MacLiammóir and Hilton Edwards during a hiatus from shooting Othello. Like a document of an idol. Its interesting and also weirdly compelling.