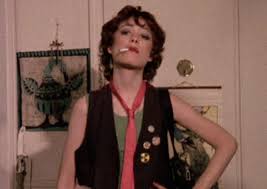 Often words like Feminist and Subversive are banded about freely. They are applied to literature, music and film as labels to both support and slander a film. SMITHEREENS is Susan Seidelman’s punk take on the romance genre and it is profoundly feminist. Wren (Susan Berman) wants the high life. She however cant seem to escape New York. When she meets Paul (Brad Rijn), a farm boy and nice guy who happen to stop in New York, he is smitten but she is cool. She wants the big players like Eric (Richard Hell), he has a band and a career. When Eric rejects her, she runs back to Paul. Though only until another Eric comes along… 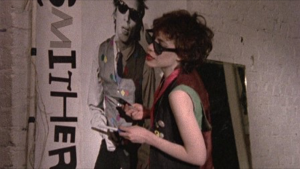 Seidelman turns the convention of the romance on its head with her film SMITHEREENS. Genre is subverted. Cool with a punk aesthetic. A woman uses a man, treats him like a cast off. The woman is independent and strong but also weak and empty. She needs success and fame. 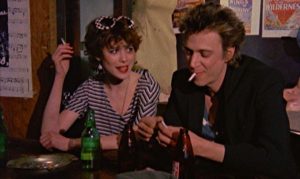 Posting images of herself stating ‘Who is…’  So on one hand its a commentary of our throw away fame society and on the other the vulnerability of female sexuality. Susan Berman holds up the film and these themes with an open tenderness. Starting as an enigma, that builds with warmth and detachment. I would have liked to spend time with her.

The disc. Sometimes I love Criterion. I mean at say £18 a pop its hard to spend on unless you love it. This disc has some very good content. The 2K transfer allows the film to be more expressive in terms of the detritus of New York and its living spaces. The commentary has been around but it is still an exposure of the films making and Seidelman discusses working with Berman. The short films are excellent and well worth going back to again and again.