A Hologram For A King Review 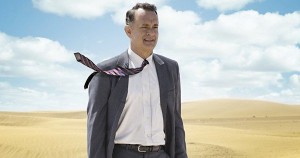 A Hologram For A King is a perfect example of Hollywood snapping up the rights to anything in print that has a track record of selling well. Ready to dip its hands into the well of affectionate regard, the machine cares little for the integrity of the source; or so common cynical perception would have it. Occasionally though, even the quote/unquote ‘unfilmable’ can surprise and stun, providing a catalyst for something that will enhance the source and introduce a whole new audience to its tale. A case in point would be Julian Schnabel’s take on the desperately sad and affecting The Diving Bell and the Butterfly.

Unfortunately for all of us, A Hologram for a King doesn’t fall into that category. And that’s despite having the charismatic presence of Tom Hanks and an overweight Cesc Fabregas lookalike involved (for those wondering, the latter is actually Alexander Black). Based on Dave Eggers’ best selling 2012 novel of the same name, this story of an American IT consultant travelling to Saudi Arabia to secure a business contract is a rather peculiar film. It reeks of the sort of idiosyncratic quirk of a Sundance Institute piece; like a budding filmmaker indulging in their baby steps. 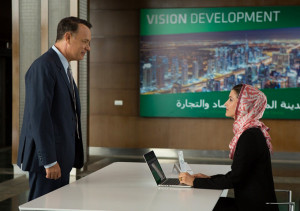 That’s not because the film is badly made, however. The cinematography is relatively lush. It’s just that the story is so neither here nor there that you sit pondering who this is made for. Alas, Hanks is plagued by a marriage gone awry, he is a lost and lonely soul, haunted by professional mistakes of the past and his voluble daughter. This probably sounds quite serious. The film doesn’t go for that tone consistently. In fact, the regale is neither out-and-out comedy nor straight-faced drama. It is bewildering as a result.

You think of how this could aim for a Lost In Translation heft, but it doesn’t strike that boldly. On a rather curious side note, Ben Whishaw barely registers to gain a credit in the film. Quite why the casting agents employed him for such a nominal role is beyond understanding. A cheaper alternative would surely have been logical? With a more substantial turn, and recognisable from the wonderful Danish TV series, Borgen, Sidse Babett Knudsen revels in her character’s full throttle lasciviousness.

In a film that sadly feels instantly forgettable, all that can be said is that the attempt to look at the culture clash of wealth meets wealthier doesn’t amount to a hill of beans in terms of insight. Hanks’ everyman appeal can’t motor this jalopy into something satisfying. To keep the car analogy going a little longer, in its diegetic hodge podge of confusion, it feels more like a cut and shut job. What a pity.