Anyone who read the Blu Ray.com review of this release might feel over burdened with rage. Well I for one, feel slightly different about the whole mess. Ann Gentry (Anjanette Comer ) is a social worker recovering from the tragic accident that took her husband away from her. She has been assigned to investigate the Wadsworth family and their only male member ‘Baby’. The Wadsworths might not seem unusual, mother of the pack Mrs. Wadsworth (Ruth Roman) is strong willed but caring.  Eldest daughter Germaine Wadsworth (Marianna Hill ) is happy but a little disconnected and youngest sister Alba (Suzanne Zenor ) is hormonal. The issue is the 22 year old diaper-clad, bottle-sucking baby man, living in the home with a pen and a bundle of toys around him. 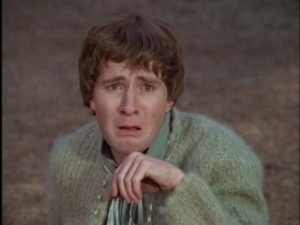 Moviedrome introduced this film to me. All its paternal desires and derangement. From the obsession of control to the emasculation of a boy for the sins of the father. From identity issue caused by living in an all female household, to the sensitisation of childhood.  All of this is packed into a film that is only 85 minutes young. There is little fat in the film, little resistance to diversion and it never sets along avoiding head on subject matters that are seat squirming. The whole is married together with a sense of humour that is black enough to find the subject serious but also the cat fights comical. Mean it might be in its conclusion but what else did you expect! 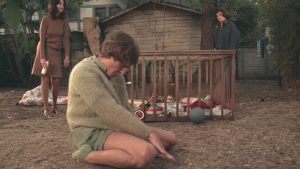 Extras can be glorious or gratingly awful. The Baby carries some nice touches. The ratio version added little for me but to the obsessive or anal its more their thing. The HD has left some questions as I believe it is from original negative and their are some very obvious deterioration. Travis Crawford is note ready and relays spools of detail. However sometimes its too much of everything in a scene and then a focus on an actor only. Needs flatting out. Though it is still very good. I wished I had seen the Kat Ellinger piece as that will be worth at least 40% of the cash!