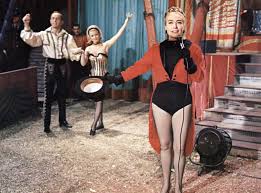 The circus has had a variety of cinematic outings. From the best picture winning GREATEST SHOW ON EARTH, song and dance GREATEST SHOWMAN to the cult gem VAMPIRE CIRCUS. BERSERK sees Joan Crawford in her second to last role before leaving film for good, as Monica Rivers. She runs a travelling circus and while living the dream one night, witnesses top act Gaspar the Great, meet his end via a tightrope that doubles for a noose. This might seem part of the risk of the circus but some are worried. Michael Gough (star of Hammers excellent Dracula as well as a whole host of British films) plays her accountant and finance manager Dorando. 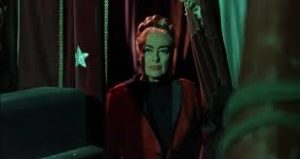 He suspects that someone is up to something. Now that could be because of muscled adonis Frank Hawkins played by Ty Hardin (of TV Broncho fame) turning up and flashing his tightrope body to full affected. He was employed to replace Gaspar. Or it could be that something terrible is actually about to happen. When Dorando is murdered in a horrific fashion, his suspicions might be more accurate than he suspected. 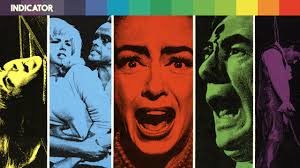 Joan Crawford had a legacy at this point in her career. She was an award winning actress, Mrs Pepsi Cola and the woman few directors in the US would work with. Lee Gambin and Eloise Ross explore this and much else (though it feels alot less academic and far more gossip fuelled however on the money it is.) 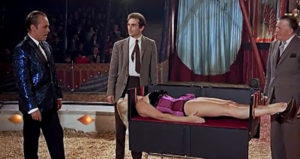 BERSERK was made just before the prehistoric man creature thing TROG, which was to be her final film (both shot in Britain no less) and it is actually a very good thriller for Crawford to sign out with. It might blend bitch slaps and a lot of circus footage that reminded me of GREATEST SHOW ON EARTH. But it works well, tightening its narrative and unleashing a clever plot twist (however ludicrous it feels when reflected on.)

HD remaster has no comparison for me as I have never seen this film before. It looks clean, no staining, colour loss or light blemishes. I liked how it was consistent throughout (though Crawford’s make up is most certainly not.) 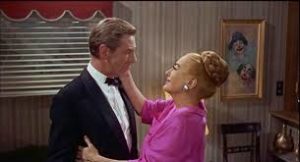 The top 3 extras on the disc are BFI interview with Joan Crawford (1956). Joan does not talk about BERSERK. However she talks about the act of acting, her favourite role and what keeps her going. Tom Baker’s Beyond Belief! VHS Introduction tasty fun and this was available on VHS for years. Its like Moviedrome but actually more tongue in cheek. New essay by Josephine Botting delves more into how BERSERK was positioned within British  films and the industry at the time. also how Joan did not want it to be too ‘horror’ or even horror at all. All to great interest for me.