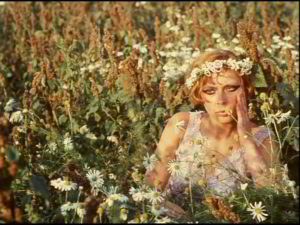 Czech surrealism staggering achievement that is DAISIES, splits a crowd like milk splits.Those who loathe it, hate its annoying leads as they traverse the film. Those who love it, like me, love its outrageous visuals, infuses the antics of two women with flashes of war footage, colour wipes, fields, food and absurdity. Two women are trapping in a patriarchal social structure and set about rebelling against it with all of their might. The film itself seemingly rebels also against it. From a dinner date with an older man, to a summer field and trees bearing fruit and the leads themselves. Its the next step from Bunuel surrealism…. 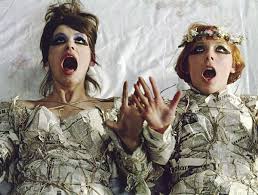 Some say its psychedelic, others that it is punk. I say it is an explosion of images, screams of ideas that like a Jackson Pollack and a loud siren of surrealist cinema. Images splash against the screen. These flash ideas and they are a rich mix of contemporary themes then and now like Feminism (discussed with clarity, wit and passion in the commentary by Daughters of Darkness), to youth social progression (not discussed but clear) and then everything from art as a tool of rebellion. If you are not sure of the what the film is like, think you are walking down a street with a pneumatic drill going on constantly and a mob of people throwing eggs and powder at you. 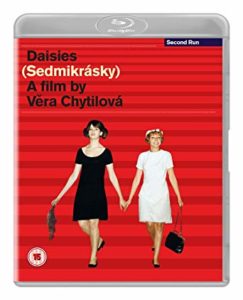 The HD transfer has finally introduced the colour shifts, rich autumnal colours and that famous black and white grain on the DVD. What works for me is the commentaries. Daughters of Darkness Samm Deighan and Kat Ellinger stand up for the films fans. They engage with the constant explosions of ideas, images and through this challenge keep apace with it. You will have to listen a few times to truly benefit but it is worth it. Feminism, Mulvey, Castration and chaos on and off the screen. Daniel Bird and Peter Hames cover all of what is in the essay and honestly is better because it has a visual mash running in front of it.