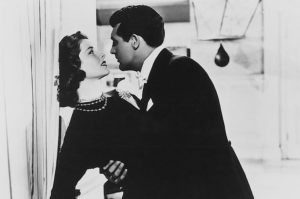 HOLIDAY is a funny, zingy comedy starring Katherine Hepburn, Cary Grant and Lew Ayres. Originally a stage play, it became so popular that it was lifted up to the Hollywood echelons. Produced before THE PHILIDELPHIA STORY but after THE AWFUL TRUTH, it is the sort of film, buffs adore. Particularly for many as it is seen as George Cukor arriving in the first grade of Hollywood directors. Cukor has cemented his position in Hollywood today (though he has been away from us for over 30 years) but then he was just coming up.  At that time he made everything, like any good studio directors did. He directed comedies, musicals and even dramas. He was a workhorse, so to speak. Yes he had big projects like LITTLE WOMEN but it was the name dear. He was also no where near my favourite. As some of you have rightfully said just then, what do I know! I also am not a fan of Hepburn…oh, you moan. Well at least I warned you…

Cary Grant is free spirited Jonathan “Johnny” Case. Self made and unafraid. He worked hard, at a time when you got rewards for doing just that. After a whirlwind engagement with a weathly lady, he tumbles into the lives of his fiancée’s aristocratic family. Riches are not for the many or the self made man. They are pompus and he is relaxed but hard working. He cant get with them and they dont want him to get with them either. His money can stay however, which is not a surprise. Its a clash of values, circumstances and opportunities. One that will not have a happy outcome. This stirs the black-sheep sister Linda (Hepburn) to action. Could love blossom? 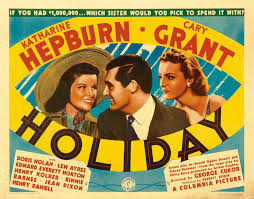 The central piece of the films quality is in director and casts connections. Grant had made a name for himself with comedy, Hepburn was a stage lady who had crossed into Hollywood. They had both worked with Cukor on SYLVIA SCARLETT and that honed a relationship that drips off the screen here. Cukor is considered the maker of ‘the womans picture’, however this underplayed his contribution (as well as many others of the era and subsequent ones). Thanks to this disc, you can see the original version and then see how Cukor took a fresh stab at it. Direction is faster, the balance of performance and screentime is clever and he proves that as a director he knew his stars better then many others. HOLIDAY (1938) is a different beast from what might be expected. Its funny, charming and witty. It has the energy to keep you intangled in its silly story but never lose sight of the moral in the message. For me it screams Hollywood at its most tender and playful. 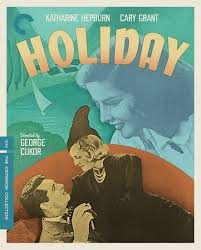 The 4K leaves nothing to chance. The DVD was not as bad as some have said but this smooths out the crumbs. I wouldnt get to worked up though.

Right bar the older version, this disc has one really good feature to it. American Film Institute oral history with director George Cukor. Cukor is a fantastic speaker. Not a stellar director but then tahts an opinion.