Those legs swinging, hands flipping and dapper attire films of Fred Astaire and Ginger Rogers are always the thing of legend and beauty. Starting in 1933 with FLYING DOWN TO RIO and finishing in 1949 with THE BARKLEYS OF BROADWAY. They made 10 in all. 1 in colour, 9 for RKO and all seemingly popular. Two of these films have gone down as classics. The first is SWING TIME (given a wash and brush up by Criterion today) and the second is TOP HAT. Now the better film is a matter of opinion (you ask me mine and I say TOP HAT but only just). However what raises SWING TIME above the average is not the crescendo dance numbers, nor is it the return to form after the dull FOLLOW THE FLEET. Oh no it was also not that this would be directed by George Stevens. No it was that this was the honing of a great film partnership. The peak of mastery and a film that made their legend.

I dont really see why you would want to know the plot. Its dicey (pun intended) and it also is hard to get in step (pun again intended). John “Lucky” Garnett (Fred Astaire) is a dancer, a playboy and a happy go lucky type. He also works at his fathers dance hall. John has other traits. He is also a gambler and set to marry Margaret (Betty Furness). Margaret’s father calls off the wedding after he is a no show. Losing a bet about getting married and wandering around the city broke, Lucky meets Penny (Ginger Rogers), a dance school instructor. She will help him win back the woman he loves and maybe even give him something much more. 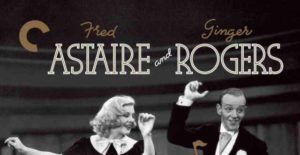 Films of this period that are labelled musicals are much more like Bollywood films that are called ‘masala’. This means simply ‘everything’. To connect the two together is not riduculous. Many attributes of the economic conditions of the people are and were similair. Unemployment in 1933 was as high as 25% of the American population. Many others were stuck into a standard of living, far lower than their parents. So you get escapism galore. From dance numbers (and an oscar winning song  “The Way You Look Tonight”), you get comedy that is broad and often silly. You also get romance, lush sets, beautiful dresses and production numbers that are eye wateringly good. The whole was obviously trying to make the audience happier. The horror of the great depression was to be forgotton for many. SWING TIME achieves this with a swing and slide. 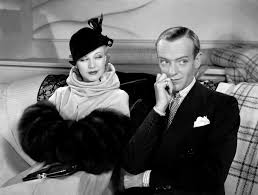 The 2K digital restoration of SWING TIME looks better than it feels. What do I mean by this? Well it looks warmer. The production numbers are clear, sets are stunning and the crisp images are a blessing to the viewer. However it still feels less lovely in some of the musical scenes. This lacks some of the body that watching it on screen does.

Amazing in a word. But as always a top three must come and it does. Audio commentary from 1986 featuring John Mueller, author of Astaire Dancing: The Musical Films is still the best thing on the disc. A classic comment on the film from its economic power, cinematic work and stars and directors skill. Mueller is a sturdy presence and achieves a solid commentary. New interview with George Stevens Jr. More for the film buffs and those who love Stevens. Capturing delightful details of the man more than the film. Essay by critic Imogen Sara Smith completes the set with an examination of dance in film and dance in the nature of all things. 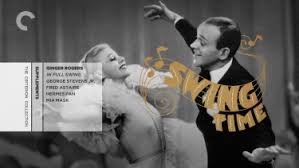