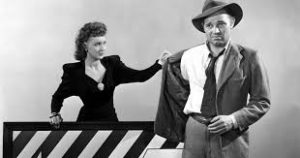 Film Noir classic B movie, 65 minute, public domain skirting film DETOUR is back. It still is less of a masterpiece than made out by film scholars and historians but it is still an exceptional addition to the genre and now anyone’s collection thanks to the Criterion collection hands. They essentially have giving it a worthy make over, refreshed its tired shell and added a few notes to this well worn song. Shifting between human despair and carnal desire, Edgar G Ulmer film never leaves that bleak note of war weary, sexual poison behind. Al Roberts (Tom Neal) is living the hard life. 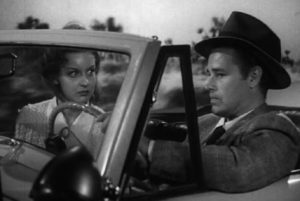 He twinkles the ivories at a nightclub with his missus Sue Harvey (Claudia Drake). When she goes off to Hollywood to chase dreams, he tells her that he will be right along. Problem is that he has no money and no car. Tough break?  He meets Charles Haskell (Edmund MacDonald) who is driving the road Al is hitchhiking. Charles is pleased with a break in fortune and another driver to help him get to Hollywood. During a rain storm, Al tries to put the cover over the car and Charles is killed in a freak accident. Al panics and hides the body.  Vera (Ann Savage) turns up on the road and when Al offers her a lift, she challenges him ‘this ain’t your car…’ What will Al do? 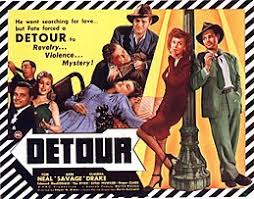 Edgar G Ulmer has gained an unworthy reputation in the catalogue of Film Noir. This is probably because the critical community was a hard blah, so the academic community had to correct this. It is a very good B movie, do not get me wrong. It is also paced heavily, predictable and lacks some of the skill a great film noir would have. This is nothing to do with budget and more to do with a lack of finesse in script and translation. In saying this, DETOUR is also a very good film and no mistake. Any young, inexperienced director should use this film to understand how to direct scenes of tension. Frame character reactions and plot with exposition.

The 4K restoration is literally stunning. The public domain version dominated all of the viewing of this film. Finally we have a clarity of light, depth and tone. This is a really good example of how the process can actually make a film better. 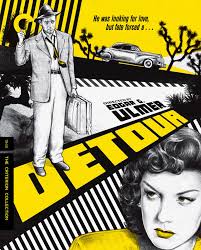 The restoration of Detour is a very good exploration of the process of remaking a film. remaking a classic that has gone from first print, then that print held (after over screening) in public domain. Finally restored to the upper folds of film quality.