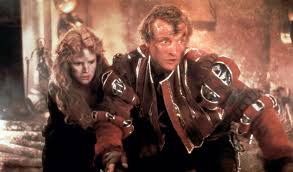 When you hear that Paul Verhoven, famed Dutch film director and maker of films like Robocop (the original), Total Recall and Basic Instinct, has made a medieval set film, your expectations are primed. 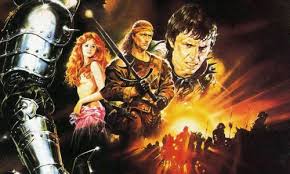 Its 1501, Western Europe (looks like Spain). A feudal lord called Arnolfini wants the return of his prize. The kingdom behind the battlements that he lost. Driven out, he know gathers a group of mercenaries to take it back by force. They succeed but after looting under instruction of Arnolfini, they are double crossed. Now Martin (Rutger Hauer) and his band want revenge. They have an asset, Arnolfini’s sons bride to be Agnes (Jennifer Jason Leigh). She wants to be returned but do they want her back? 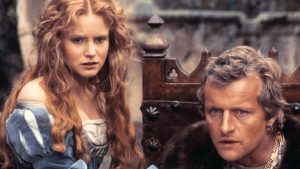 So we know that swords, sex and sleaze are on the table but will it still work to his oeuvre? Paul Verhoven’s  Flesh and Blood does not scrimp. In fact it almost increases all by a factor of 10. Sex is his primary driver, like I guess how Pasolini depicted the period. Verhoven lacks Pasolini’s wit, frankness and natural storytelling. He does however maintain the momentum. 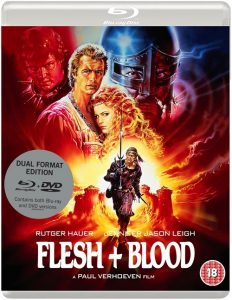 nemaIts violent, sexy, bawdy and blood thirsty. It is also uneven and unexceptional. It falls down but rallies and it avoids some of the later Verhoven troupes.

The disc has an assortment of good things to chew on here. I would have to say the top three are –

The interview with Verhoven is very good, very animated.

The booklet will be amazing..