Harry Dawes (Humphrey Bogart) was a noted film Director and writer. Now he is the lackey of a wannabe movie mogul and 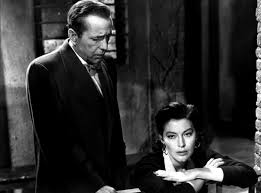 horrible man Kirk Edwards (Warren Stevens). This all might change when Maria Vargas (Ava Gardner), a Spanish singer and actress signs up for a film. Things start badly when publicist and walking sweat machine Oscar Muldoon (Edmund O’Brien), tries to connect with her. When Harry gets involved everything changes. Harry is a normal man underneath the film vaneer. He tells Maria that her life and his can change for the better. They can make art and not just film. They become friends. She likes his frankness and he likes her vulnerability. The two decide to work together and they cross the Atlantic to make the future and work together on a few films.  With subsequent films by this team, Maria becomes a respected actress, Harry’s career shines bright once again, and their relationship becomes a healthy friendship. 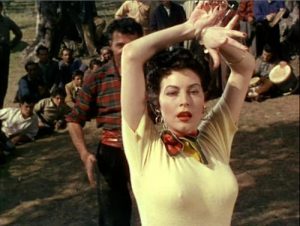 Absorbing cinema like this makes life sometimes so sweet. Oh my. Mankiewicz in his prime. Bogart in the late period of his career and still potent. Ava Gardner playing straight and sexy. Jack Cardiff, the cinematographer of powerful visual colours and warm tones. Hollywood being taken to task with a fist not in a glove. When you come to watch the film with this baggage, its hard not to be instantly swayed. As the titles roll and the actor play, its a complex piece that unfolds.

It is hard satire. One that can be a sharp and uncomfortable stare, especially with the current climate unfolding. Mankiewicz understood verisimilitude like little other do. By bringing in depth of personality over both time and script. He spent time in the entertainment industry and replicated its reality. Then used this to strike, hitting at entertainment with All About Eve four years prior. Then he went for Film making and it was savage.

Striking the demonic producer, downtrodden director and underlings that are like bugs, underfoot. Magnificent. Now also see that Oscar winning turn from O’Brien. Its a big performance that benefits the whole because it shapes everyone else’s role. Lovely enough to watch as a single work or as a part of the whole. Director Mankiewicz was always good at this. He directs performances without neglecting others. See a Letter to Three Wives as an example! 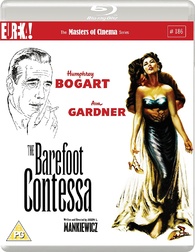 The disc is a bundle of delights. The 1080p envelopes the films visuals. Its that warm, fuzzy view. That soft focus captures such a shimmering heat and cinematic feel. I love its tenderness and its shines through all of this. The high point on the disc is the commentary. Historians Kirgo and Del Valle make the film come to life. Imaginatively narrating the films brilliance without filler. The essay from Glenn Kenny should be given some time. Detail and energy galore.
DUAL FORMAT SPECIAL FEATURES: