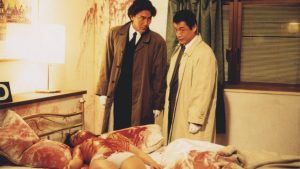 Kiyoshi Kurosawa film not only brought him to international attention but unsettled many who saw it. It is a relentlessly unnerving piece about the power of the dark recesses of the mind. A series of awful unexplained murders has police baffled. Those who committed it have no recollection of the moment or the mindset leading to them. Detective Kenichi Takabe ( Koji Yakusho) lacks any breaks in the case until a young man without any memory of who he is, is connected to all of the events… 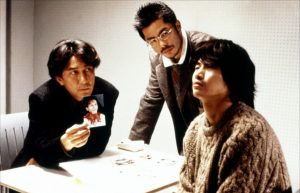 J Horror rocked the world in the late 90s. It was often techno phobic (as was society), post modern (as was art) and unashamedly visceral. In Cure it is reversed and the power of a human agent is central. The monster stalks and preys on human frailty but it also becomes a meditation on the perverse isolation of individuals. Japanese cinema has often focused on the singular affecting the many. Here it finds Kiyoshi Kurosawa at his most dynamic, expunging the emotional attachment of community and getting to its core. We are slowly becoming a more destructive, isolationist creature. 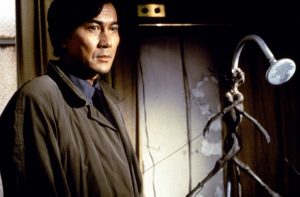 The 1080 presentation has a little issue with grain on the exterior scenes. By this I mean the celluloid seems to have been over exposed and the light perforates the image. Its a minor issue. The real high points on the disc however are the Kim Newman interview. He adds backstory and J horror notes which benefit the viewer. The other is the new interview that might be a little too short but Kurosawa is a wonderful orator and he makes a case for some of what I stated above! 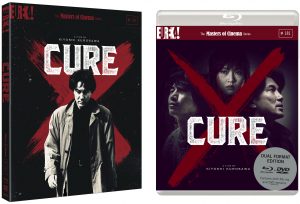