The Legend of the Mountain Blu Ray review

Wuxia genre classic Legend of the Mountain sees Young scholar Ho Yunqing (Shuih Jun) trying to transcribe a Buddhist Sutra held far away by a monk. The Sutra gives immense power to whom ever holds it and many are coveting it. He goes to an isolated monastery deep in the mountains. Hoping to not only transcribe it but also to stop it being stolen. Will he be successful or will something come to hamper his plan?

King Hu already has a stunning back catalogue without this film, his second most famous film coming into our view. Difficulties are abound with classics of international cinema to start with in truth. They already have the baggage of film critical society, audience experience and the sweep of literature weighing them down. Without then adding the baggage of the master Hu and his rich works to the mix. All in all it amounts to a whole lot of noise. 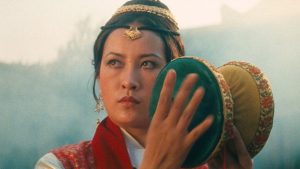 That is when a film fan watches this, they already have a voice in their head directing an appropriate response. An expected response. Either contrarian or conspirator. So for me to say anything would be little more than empty air in a whole heap of it. I liked the film and found much more to it. than I did either previously or on its first watch. It could be the additional scenes, however little they seem to add. Director Hu understands the dynamic of desire and this is what makes the film so much more interesting to me now. It makes the film flow wonderfully. Events involving desire are always overplayed. They are also filled with sexual tension. Tension adds rich seams. I like how playful the manner of tens scenes are. They hinge on comedy and the threat of something but always feel the tension without erupting too soon.

I will focus on the extra pieces that Eureka have added for us.